Running the Ramsay Round 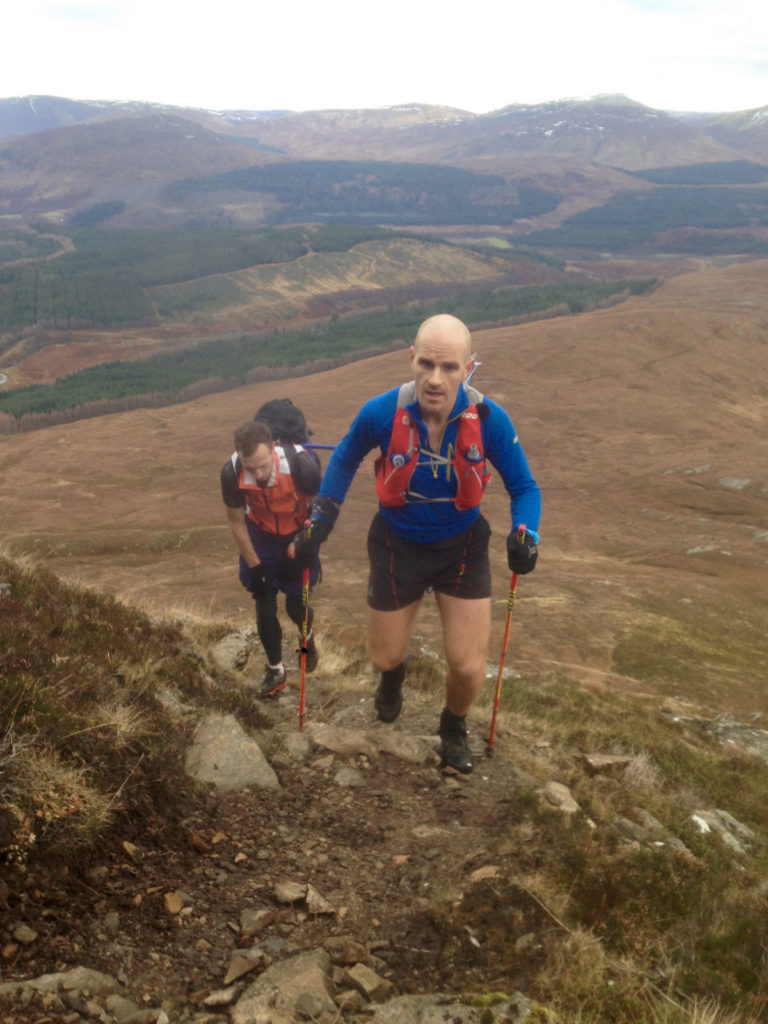 Donnie Campbell has been running for 20 hours. He is shrouded in the darkness of a Scottish night in December. He is climbing Aonach Beag, the seventh highest mountain in Britain. As he ascends, a wall of snow, glistening in the glow of a head torch, rears above his head.

The microspikes that might have eased his passage are 10 miles away in the backpack of a friend who inadvertently ran away with them. Tom Owens, Donnie’s support runner, gingerly begins kicking steps into the snow. Donnie follows. If I fall or stumble, Donnie thinks, I am going to plummet 500 metres back to the bealach. Game over.

Donnie was attempting what only six people had ever achieved – a Ramsay Round in winter. Scotland’s representative among the trio of big 24-hour mountain rounds, the Ramsay – pioneered in 1978 – encompasses a 56-mile loop of 23 Munros, with the first or last mountain, depending on the direction of travel, the little matter of Ben Nevis.

Climbing a cumulative 8,600 metres, the statistics are comparable to the more well-known Bob Graham Round, but the Ramsay is unquestionably harder. The terrain is more committing, the opportunities for support more complex, the impact of altitude and weather far greater. There is a reason why only 93 people had successfully completed the Ramsay Round in the 38 years of its existence.

Glyn Jones in 2002 was the first to conquer winter, succeeding in an incomprehensible 54 hours. “That we can still find adventure when we want it, in this soft underbelly of the rich world, is a right that we should not give up without a fight,” he wrote after. Only Jon Gay, a Fort William architect, had managed to beat the day in the following 13 winters, clocking 23 hours and 18 minutes in an “alpine wonderland” in February 2013.

Shortly after 9pm on a post-work Friday, Donnie, a 32-year-old personal trainer and former Marine, started running, committing to near-incessant movement amid winter hostility for 24 hours. From the round’s traditional starting point outside the Glen Nevis youth hostel, he climbed into a range of shadowy mountains known as the Mamores. He was alone, ticking off summits – as is the way on the Ramsay – on trust.

Crossing the aptly-named Devil’s Ridge between the second and third Munro, Donnie dropped one of the two GoPro cameras he was carrying to film his attempt. He watched it freefall, then disappear into the darkness. He left the devil for a potential hell, descending 50 metres of dim mountainside to locate the camera. Donnie served in Iraq as an 18-year-old in 2003; this manoeuvre – albeit time-wasting – was not going to daunt him.

The going had been good. But this was winter in the Scottish mountains. Inevitably – rightly, perhaps – snow came, with the freshly fallen flakes obliterating compacted ice beneath. Donnie met his supporters for the first time after completing the 10 Munros of the Mamores. He would see them again after another three Munros, as he circumnavigated Loch Treig.

At Fersit, the only point at which a road comes close to intruding on the round, he ate like an ultra running king: tomato soup, bread, salty crisps, a cup of tea, a can of Red Bull. Having run for 12 hours, ascending and descending thousands of metres, he was off again. There were still 10 Munros to come, with Ben Nevis, the biggest of them all, lying in wait at the very end.

Before beginning the section on the Grey Corries – a ridge of lofty summits that oppose the Mamores – Donnie’s microspikes disappeared, carried unwittingly downhill and away on the back of Andrew Murray, a friend and fellow ultrarunner. The terrain of the Grey Corries makes them runnable – relatively, of course – but the snow created a treacherous surface, forcing Donnie into a determined walk. The short day ended. A second night dropped.

And then came Aonach Beag, the crux of the round, Donnie clinging to a snowy precipice, hoping. “When you have been out for 20 hours and you are concentrating for all that time, you are not as stable on your feet,” he said. The runners hauled themselves up the snowy bank, the gradient mercifully receding. The summit was still some way off, but the danger was over. Donnie and Tom – with just one properly functioning headtorch between them – ran on.

Time now became the obsession. “I wanted to get significantly under (Jon Gay’s time) to consolidate the record,” Donnie said. As he bridged the Carn Mor Dearg Arete and crossed the rubbly plateau of Ben Nevis, those watching a live tracker following his movements used social media to speculate on his likelihood of success.

They would not have known that the boots of hundreds of Ben Nevis walkers had polished the snow, frustrating the hill runner’s progress. But, below 700 metres, the snow was gone. Donnie opened up, the lights of the glen beckoning far below. With a usual bridge under repair, Donnie had to wade the knee-deep River Nevis to reach the road in the glen. Moments later, he was flashing by the youth hostel, then lying crumpled on the ground. He was a record-breaker: breaching Jon Gay’s time by 12 minutes, becoming only the seventh person to complete a winter Ramsay. 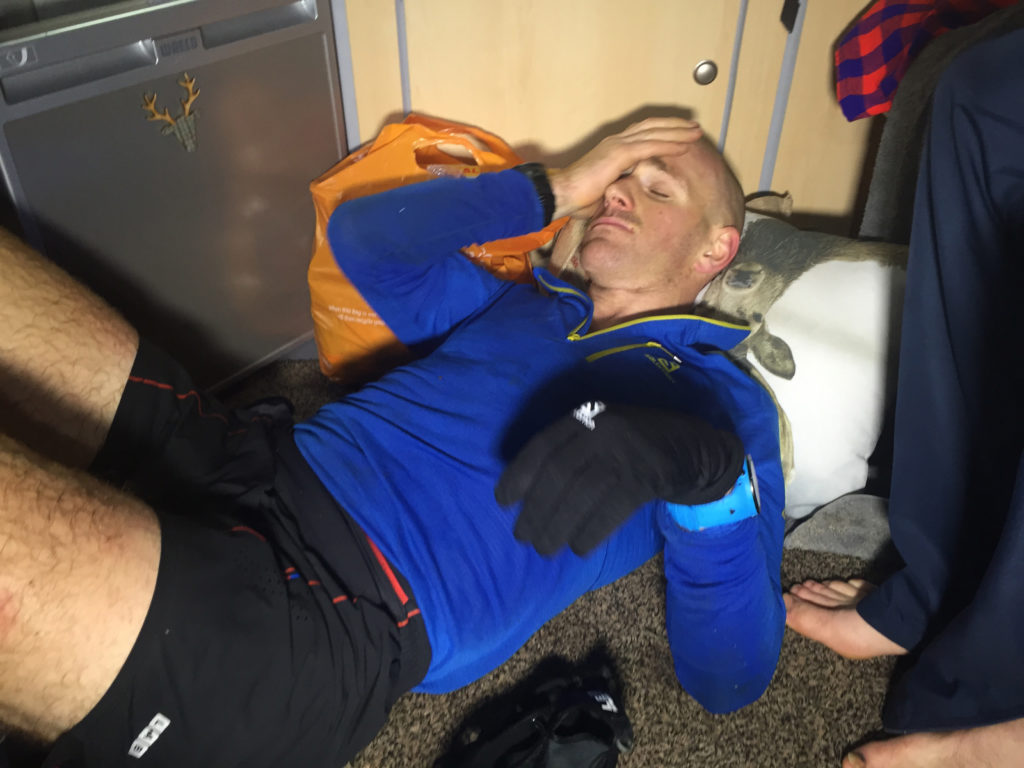 RUN OF HIS LIFE

The hardest run of his life, Donnie had said soon after. We met a week after his round. He had already been running since: an “easy 10K” on the Wednesday, then a 90-minute run today. On reflection, did he still think the Ramsay was the hardest?

The question was posed to a man who once ran 184 miles from Glasgow to Portree on Skye in 44 hours without stopping to sleep. “That did not feel as bad,” he said referring to his seven-marathon effort in 2011. “The Ramsay Round is more remote, more dangerous, and in winter…” His words trailed off. The meaning was abundantly clear. One slip, one lapse in concentration – oblivion awaits.

I watched Donnie from the window of the Italian café, its interior reeking with garlic, where we had met. Once on the street, he started running, as if by instinct, disappearing into the Friday night crowds of central Edinburgh. To them, he was just another runner. Donnie would not have minded: after all, the glory is in the doing, Glyn Jones had determined, not in the having done.

Jonny Muir is an Edinburgh-based author and hill runner. His latest book, The Mountains Are Calling: running in the high places of Scotland, has just been published.