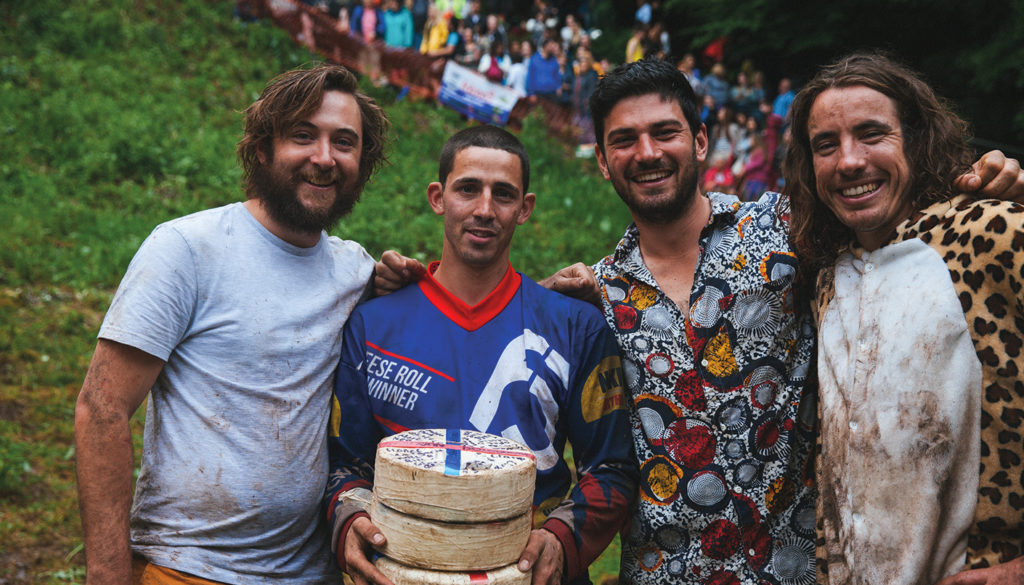 This Spring Bank Holiday in the heart of the Cotswolds, thousands of spectators will stagger up the sides of Cooper’s Hill. Teetering into their start positions at the top will come 19 madcap competitors and the 20-time Cheese Rolling Champion Chris Anderson.

On the Master of Ceremony’s command, a 4kg Double Gloucester wheel will be released, quickly accelerating up to 70mph. One second later, the world’s wackiest and arguably most dangerous running race will begin.

When did you first run down Cooper’s Hill? 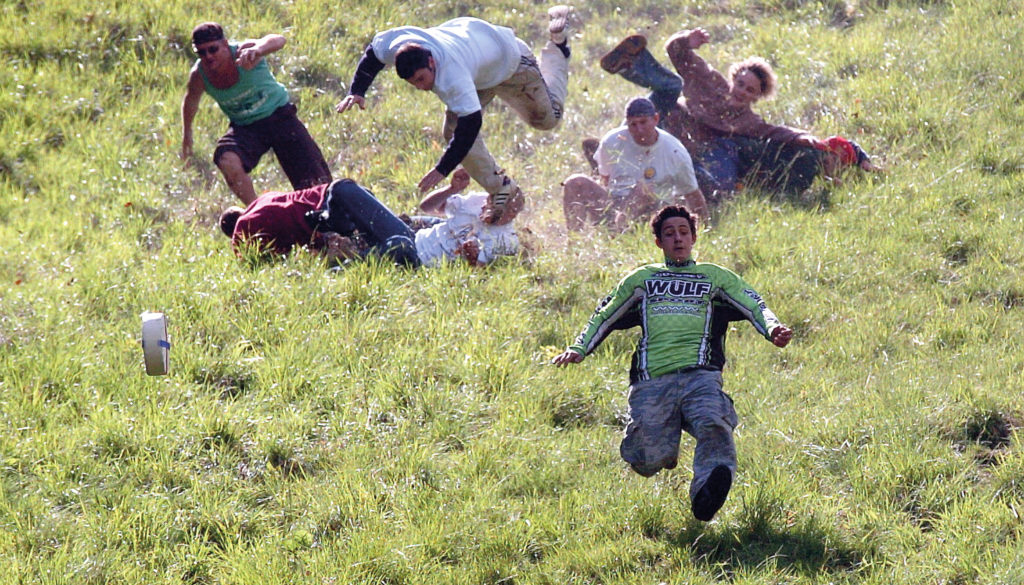 Chris Anderson in his cheese-rolling youth, en route to victory in 2005. Photo by Paul Nicholls

I used to go up the hill with my friends as a teenager to have a few beers. The first time I ‘ran’ down was when my brother threw me off the edge. That’s how it all got started. Today I normally have just one drink before the race.

Previously I’ve broken my ankle, bruised my kidneys and concussed myself. The paramedics aren’t allowed to give you as much pain relief if you’re drunk. So I don’t like to drink too much, just in case I get hurt.

What’s the format of the Cheese Rolling?

The main event is the downhill race. Nobody ever catches the cheese, but the first to the bottom gets to keep it. There are several races each year, so I’ve now taken home 20 of the locally made Double Gloucesters since 2005.

There’s also uphill races – but I only tried once. I got halfway before giving up. My niece Kacie has won it for the last three years running.

Where did this wonderfully mad British tradition come from? 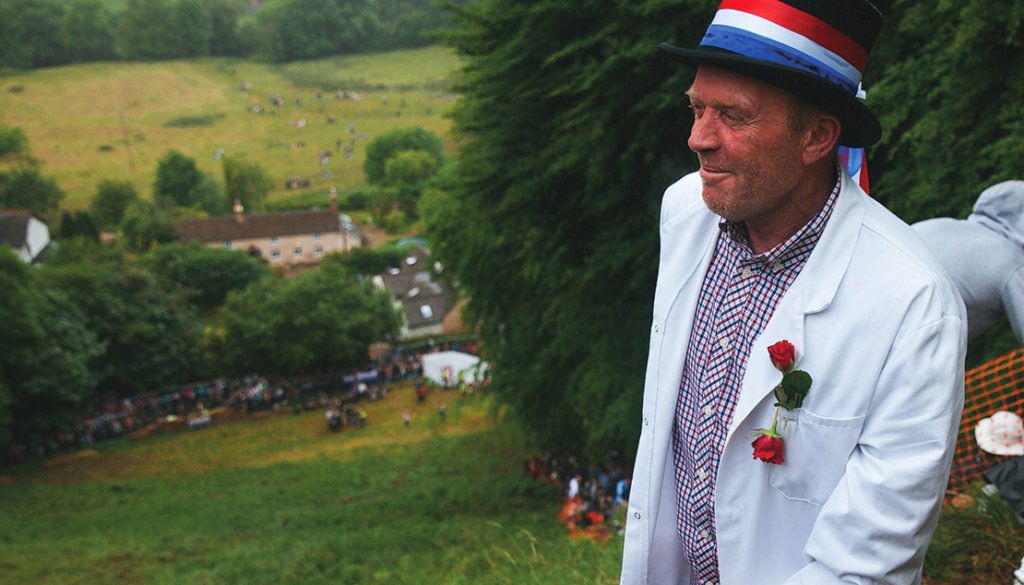 The Master of Cheese Ceremonies ensures no one takes the biscuit

There are lots of theories. Some say it started when someone dropped a cheese and went chasing after it. My son thinks it goes as far back as the Romans. I go with the theory that it was a Pagan ritual, where rolling the cheese downhill supposedly brought good luck for the harvest.

Over the years the race has been cancelled occasionally, like in 2009 when 15,000 spectators tried to show up. But a cheese has always been rolled to keep the tradition alive.

Most competitors crash and burn, spending more time on their face than on their feet.  What are your tactics? 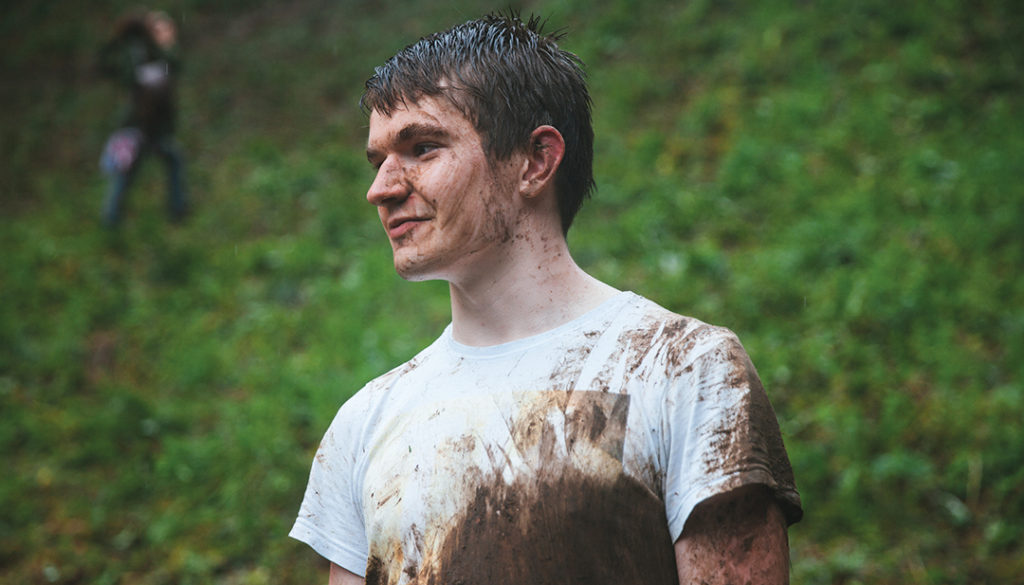 There’s a faint ridge running down the middle of the hill. I always try to stick to either side of it. It’s actually slower staying on your feet on the steepest parts.

I won all three men’s downhill races. But in one of them a competitor had a good lead on me. He then started tumbling and knocked himself out. He was out cold for about five or 10 seconds. That was the only reason I beat him. He was back at the top again for the next race.

You always look very laid back at the cheese rolling, competing in jeans and a motocross t-shirt. Would you consider yourself a runner?

Have you heard of the Weston Beach Race? Every October they build a 5K course on the beach. It’s designed for motocross, with some of the sand dunes as big as houses, but there’s an event for runners, too.

I put on my trainers for the first time last year. The guys who came second and third were club runners – they had all the gear. By the end of the first lap I had a 3:30 lead, and then I managed to open it up. I won by eight minutes.

How fast are you running down Cooper’s Hill?

The old organisers use to say the cheese could get up to 70mph. My quickest time down the 90-metre hill is just under eight seconds. At a guess I’m probably clocking near 25 to 30mph. (Bolt’s top speed on the flat is 27.8mph.)

You’ve starred in a music video by the Macabees. How did that happen?

Back in 2009 I was up on Cooper’s Hill the week before the race, just practising running down with a friend. There was a film crew, and they asked if they could record us. I wasn’t looking for any fame or anything, but somehow they found out about the races I’d won, and things went from there. (Watch it here.)

In the video you tell a funny story about returning to work the day after being concussed and putting the kettle in the fridge. How much longer can you stay in a sport with such serious consequences? 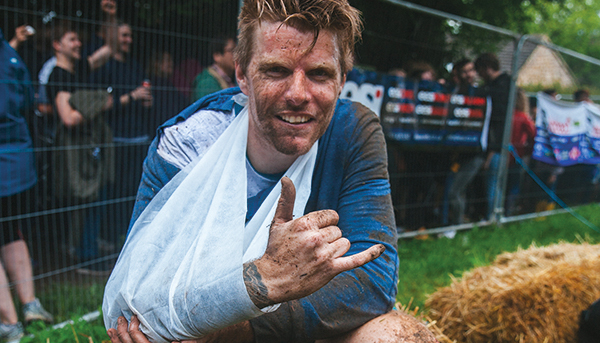 It’s tradition that a local person wins at least one of the races. The people who organise the event are the guys I grew up with. I’ve got to make sure one of us wins, but I’m 30 now and I’m starting to feel the knocks a bit more after the races. My youngest son will probably run it one day. He’s run down from halfway before. He’s only eight.

How do you stop at the bottom? 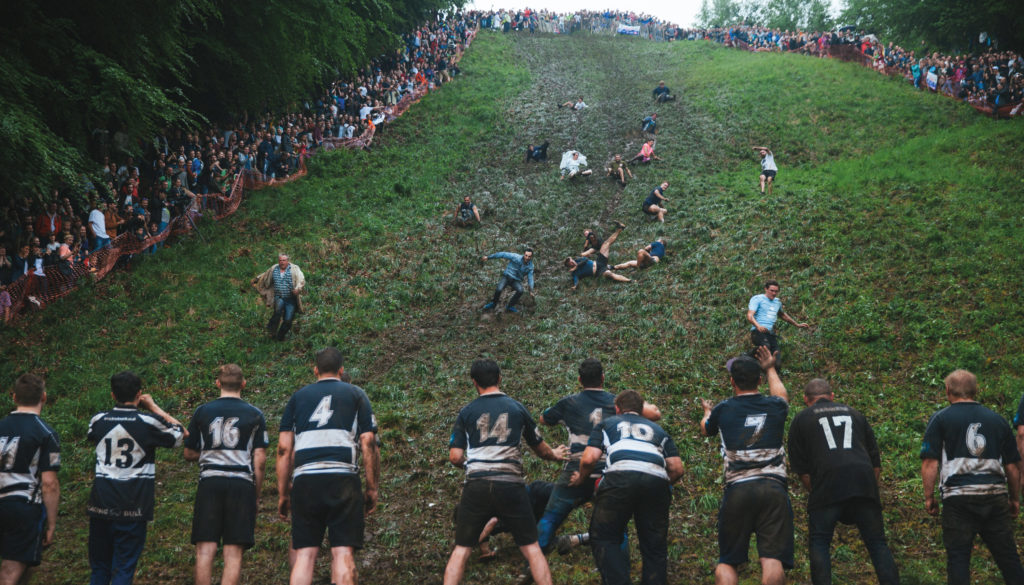 The local rugby team are in charge of that. They line up, tackling people to the ground. They like to get in there with a big hit. That’s where several injuries stem from. Last year they got asked to tone it down! There’s got to be some level of control.

You need to get to the hill by 10:30am. By 11am it really starts filling up. They let 20 people through the gate at the top to run each heat.

If you don’t get a place, there’s a chance to run at the end without a cheese to chase. Afterwards, everyone heads down to the local. It’s called The Cheese Rollers.