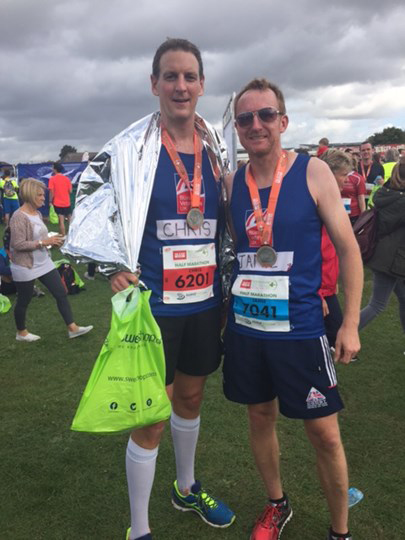 Jamie (right) and Chris after running the Robin Hood Half

Since his sight started to deteriorate while serving in the Royal Navy in the Gulf War, Jamie Weller has won four medals in the 2017 Invictus Games, trekked up Mount Everest for Help for Heroes, and run several long-distance races.

But none of these achievements would have been possible without the support Jamie received from Blind Veterans UK (BVUK) when he first started to lose his sight at the young age of 21.

Jamie says: “Blind Veterans has helped me in so many ways: by things like teaching me how to use a computer through software that substitutes sight with sound, as well as everyday skills  like mobility, which I had to completely relearn.”

Blind Veterans UK is a London-based charity that was originally set up to support soldiers who were blinded in World War I. The charity has now helped more than 35,000 veterans and their families.

The director of engagement at BVUK, Jackie Harbor, says: “We’re committed to the belief that no one who has served for our country should have to battle blindness alone.

“Our core aim has always been to provide blind and vision-impaired veterans with the support they need to lead full and independent lives.”

BVUK continue to help Jamie, many years after he originally lost his sight. 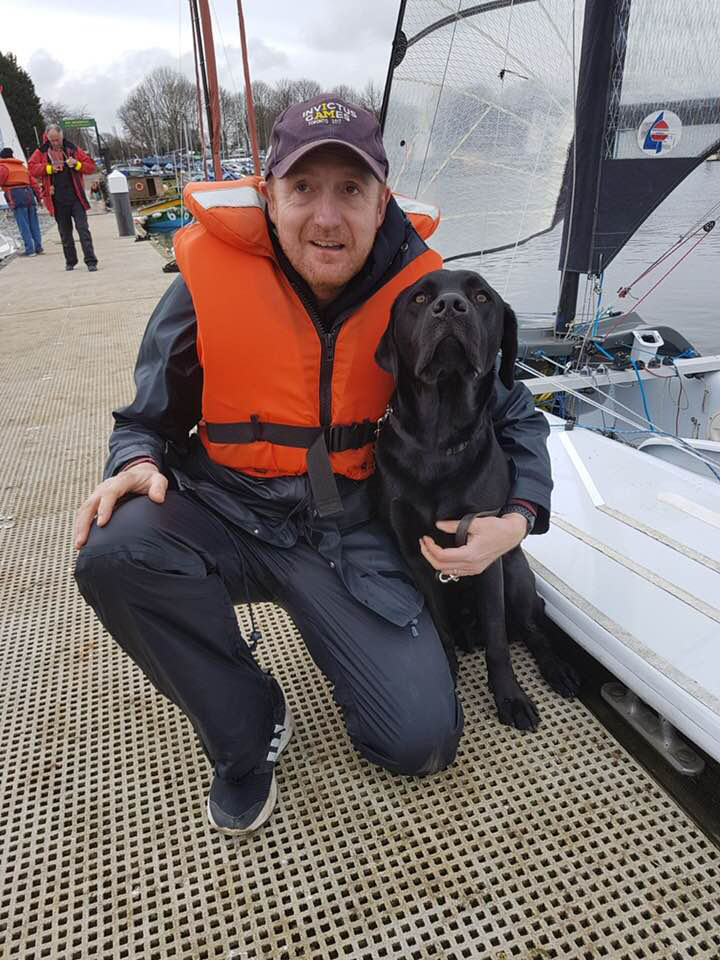 Jamie with his guide dog, Freddie

This year has seen the introduction of Freddie, Jamie’s guide dog, who was provided by BVUK after Freddie went through extensive and costly training.

“Everything BVUK have done for me has given me the confidence to manage my blindness and lead an independent life,” says Jamie.

But all the help Jamie receives from the charity would not be possible without fundraising.

Jamie completes fundraising events for BVUK and has now also recruited his friend, Chris Walker, to contribute to his mission to raise money for the charity that helps him so much.

In 2016, Jamie wanted to run the Robin Hood Half Marathon in Nottingham, to raise money for BVUK, but due to his visual impairment Jamie needed a guide to run the race with him.

Jamie called upon Chris – a friend of 20 years – to guide him through the race.

Chris recalls: “When Jamie asked me run the half marathon with him, he told me he wanted to do it for the experience and was not out to get a quick time.

“But Jamie is really competitive and about eight miles in he wanted to speed up. He actually went off ahead of me, using his sense to find other runners to use as a guide and ended up finishing about three minutes before me!”

West Bridgford-based Chris has always wanted to build on the half-marathon experience and run a full marathon, but says there has always been an excuse not to do it.

The 43-year-old applied for a ballot place in last year’s London Marathon but was not successful, and admitted that he did not want to apply for a charity place as it would have been hard to raise the fundraising target set by the charity.

When Jamie heard about Chris’ rejection, he knew he would be able to get Chris a place in this year’s marathon through BVUK.

Chris says: “Jamie challenged me when I told him about my reservations about running for charity and I did not have an out anymore. I had no more excuses.

“Jamie is an incredibly inspirational chap and a great friend, and the charity has done some amazing work for him, so I suddenly had a great reason to run the London Marathon,” Chris adds.

Chris’ application to run for BVUK was accepted and he will be one of 16 runners completing the capital’s iconic 26.2-mile race on Sunday 22 April on behalf of BVUK.

“I started training back in December after I drew up a training scheme, but I have struggled to get in all my scheduled practice runs over the last couple of weeks because of the snow and the rain,” says Chris.

But, despite the bad weather, he still hopes to finish the marathon in under four hours.

Jamie says: “I am really pleased and proud that Chris is running on behalf of BVUK, especially because it is such a big commitment with all the training and fundraising.”

With the help of his wife, Lisa, who organised a raffle, and daughter, Lily, who completed a sponsored ice skate, Chris has managed to reach his fundraising target of £2,000 and now hopes to reach £3,000 by next month.

BVUK spokesperson Jackie Harbor adds: “Supporters like Chris are at the heart of our charity and it’s thanks to their generosity, spirit and hard work that we’re able to help transform the lives of so many veterans.

The money raised will go towards BVUK helping more veterans, like Jamie, to manage their blindness.