Does amateur sport have a drug problem?

In the world of elite sport, doping scandals have become unfortunately common. In BBC’s Panorama documentary Catch Me If You Can, reporter Mark Daly investigated apparent allegations against athletics stars Alan Wells, Galen Rupp, and coach Alberto Salazar, and these allegations seemed to be the tip of the iceberg in terms of elite-level doping. But even more surprising than the allegations themselves, was how easy the documentary suggested it was to obtain and take performance-enhancing drugs, while remaining undetected.

Using a technique known as microdosing, Daly showed it was possible to use enough erythropoietin (EPO) to affect his performance, but remain undetected in a biological passport test. It begs the question: if it is that easy, what’s stopping other amateurs doing the same? Not much, is the suggestion from Union Cycliste International’s report for the Independent Commission for Reform. The report, which came out in March last year, stated the UCI’s belief that “doping in amateur cycling is becoming endemic” and that this was confirmed by “riders, professionals, managers and anti-doping personnel.” It suggested that doping was increasing in both under 23 riders and over 40s masters racing. There have been a number of cases – Dan Staite, a British amateur cyclist in his late 30s, was banned for using EPO in 2010 – but it seems a far cry from finding yourself lining up next to a doper at your weekend league race.

Founder of Sporting Integrity Michele Verokken: “Amateur sportsman can be just as competitive”

Michele Verroken, founder of consultancy Sporting Integrity and formerly Director of Ethics and Anti-Doping at UK Sport, thinks there’s every possibility that you could be. “They could be members of a club where consent for testing is in place, but they are able to access substances across the internet or at their local gym, and may well be doing so thinking that no one’s going to test them at that level.” Verroken, who was at the forefront of establishing Britain’s anti-doping policy for 18 years, says that the basis for any anti-doping programme should be a combination of competition testing and out of competition testing, where athletes are signed up to what’s known as the ‘whereabouts programme’. This means they have to give testing officials notice of how to find them for random testing. Naturally, the majority of athletes signed up for this programme are elites, so the likelihood of an amateur being tested in competition is slim; the likelihood of being tested out of competition is even slimmer.

With no prize money at stake, though, and limited opportunities for sponsorship deals, what would drive someone to cheat at that level? Verroken says it doesn’t have to be any more complicated than competitiveness. “In amateur sport people can be just as competitive. I don’t think that it changes whether they’re an elite amateur, an elite professional, or an amateur.” Take cycling, she says, where first you’re part of a cycling club, then you start posting times, you start upgrading your equipment, start moving up groups because this group is going to do this distance or this number of hill climbs. Or even the wearable tech revolution, with gadgets counting your steps and urging you to share your data on a social network somewhere. “It just all starts to have an inbuilt competitiveness.”

But while some may go out looking for an unfair advantage, other amateurs might not even know they’re doping. For example, at a professional level, an athlete could be required to seek what’s known as a Therapeutic Use Exemption for medicines such as asthma inhalers. But the amateur suffering from the same condition may not even know that their inhaler, depending on the type it is, contains a prohibited substance.

As far as Verroken’s concerned, yes, doping in amateur sport could be a problem, but it comes down to intent. “Is somebody intending to use a medication in order to enhance their performance? At amateur, recreational level sport, there is that opportunity,” she says. “Significantly, though, at an amateur level there is less likely to be either a year-round drug testing programme or a programme that’s focused on competitions.” As a result, the savvy amateur doper could have plenty of time between competitions to use drugs and then simply stop taking them in time to avoid detection.

Stopping dopers is about first focusing resources on those sports where it’s most likely, says Verroken: “Rugby would be one of those, possibly football, certainly athletics, weightlifting, perhaps to a certain extent tennis and definitely swimming, where the use of certain substances at an early age would lead to an advantage.” Then get into those sports early, but not just with a deterrent. Rather, it’s about athletes understanding they don’t need drugs if they put themselves – their health, and the reputation of their sport and their families – first. “There’s a lot you can do without having an oppressive testing regime.”

Ian Sharman: “In ultrarunning, everyone wants everyone else to do well.”

One contender for the fastest growing amateur sport has got to be ultrarunning. Figures compiled by Ultrarunning Magazine in the US last year show that over the past decade the number of events has more than doubled, and there are now more than 1,200 races.

With more runners, sponsors and prize money entering the sport than ever before, is it just a matter of time before ultrarunning has its own spate of doping scandals? Elite ultrarunner and Grand Slam of Ultrarunning record holder, Ian Sharman, doesn’t necessarily think so – at least not on the trails. “I think there’s definitely a cultural difference between the cyclists and the triathletes, and the runners. But also between the road-based people and the trail-based people. Trails do tend to be more about runners who love what they’re doing and, ultimately, if you don’t love running you’re going to find it very difficult to do a 100-mile race through the mountains.”

There are also myriad factors that doping just wouldn’t help with in ultrarunning, says Sharman: from tactics for handling nutrition and the weather, to running at night. “The longer and more extreme the race is then the less the physical side – that one % that doping can influence – will matter.”

While he says he would be surprised if any of those he knows among the elite ultrarunners were doping, it would be foolish to assume there’s no one doping in ultrarunning, and people have been caught. The two biggest prize-money races on the ultrarunning circuit are South Africa’s Comrades Marathon and Two Oceans Marathon. The top 10 runners can win money, so all have to take a drug test after the race. In 2012, Comrades winner Ludwick Mamabolo tested positive for a banned substance but was later cleared, while Two Oceans winner Natalia Volgina was stripped of her title in 2013 after being found guilty of using anabolic steroids.

“Clearly, it is happening where there’s the incentive,” he says, “but that’s also on the roads, rather than the trails. I think in my sport, everyone wants everyone else to do well. I’m sure that will change over time as more money comes into the sport, but even if you had mega bucks in ultrarunning, I don’t see it ever becoming as it is in professional cycling.” 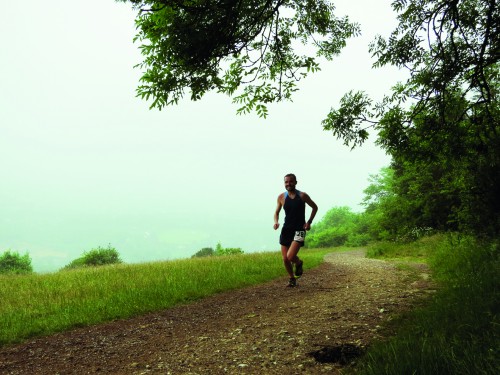 The Pros Vs Us

Running the Ramsay Round

A Runner’s Guide to Animal Attacks
All Videos Videos