Kilian Jornet (right) finally gets to meet his hero, Mark

Looking out my hotel room window in Keswick, I can see a powdering of snow on the high peaks and the town awash with pale spring sunshine. Perfect running conditions. But weather changes pretty quickly in this part of the world – by the time I’ve put on my running shoes and looked out again, the peaks have vanished behind a colossal thundercloud that lets forth a volley of hailstones and sets the pavement humming.

I’m here for Salomon’s 2016 Advanced Week, which it describes as ‘an intensive week of product development and passion shared with our best athletes and engineers’. Today some of these athletes are giving a presentation about their experiences – a chance for running enthusiasts to meet some of the titans of the ultra world including Kilian Jornet, Emelie Forsberg, Max King, Anna Frost, Ricky Gates and Ricky Lightfoot. The plan is to head out for a friendly run afterwards; there are 5K and 10K options and an “all-welcome” approach that I foolishly interpret as “this will be dead easy”. The talk is in a local theatre, and is introduced by a French Salomon delegate to whom no-one has explained that Keswick is pronounced “Kezzick” and not “Kez-week”.

Salomon worked with a production company called The African Attachment on a series of short films that the runners now take turns to introduce. They’re beautifully shot and feature ferocious running talent unleashed in some truly awe-inspiring landscapes.

The joy of movement

What stands out most is the sheer joy of being alive that trail running evokes in its athletes. Kilian Jornet is the embodiment of this relentless enthusiasm – rather than the taciturn Man Of The Mountains I’d imagined, he’s like an errant puppy who has just discovered his own legs. Running to Kilian is a never-ending series of schoolboy pranks and near-death experiences, all of which he relates with a gleeful grin. We watch footage of him sliding down Mont Blanc on his arse, whooping ecstatically. “It’s a bit painful”, he says. “But it’s fast.” He once ran an ultra with only a stock cube for sustenance because he thought it might be an interesting source of salt.

He wanted to run in Alaska: he arrived in Anchorage wearing flip-flops and realised he should probably, at some point, consider buying some running shoes. Cue a clip of a bemused Alaskan sales assistant trying to sell him Salomon trainers. “Is there ice up there?” asks Kilian, pointing happily at the vast frozen wasteland on the horizon. “You may…” the shop assistant pauses to collect his thoughts. “You may, er, run into some ice up there.” Kilian buys some trainers and heads cheerfully out for a run in his underpants, having omitted to bring trousers. He then wonders aloud whether he ought finally to get round to amputating his little toes. He feels sure they are unnecessary. “And you could wear a smaller shoe!” he says, delightedly.

The talk ends; it’s time to run. We assemble outside a sports shop on the high street and, miraculously, the sky clears – it’s warm and sunny and there are smiles all round. The run itself begins with a mile or so of steady climb through woodland. Then, when you feel that you must be reaching a summit of some sort, the terrain opens out to reveal a gruelling hill ascent that reduces all but the strongest to a bit of a limp. But what makes this run so enjoyable is the complete lack of elitism; world-class runners and novices run shoulder-to-shoulder, chatting and offering each other encouragement.

At the top, we pause for  a photo against a dramatic, thundery looking sky before the 5K group heads back while the rest of us press on down a slippery slope that claims several victims, including Anna Frost. I’m amazed at the way she goes down and regains her footing in one fluid movement, as though the fall is just a part of the run – it’s this playfulness, and the idea that the landscape is a giant playground, that separates the pros from the amateurs. They do forward rolls, gravity-defying leaps and literal jumps for joy, unaware that they are mirroring the movements of the spring lambs in the adjoining fields.

We arrive back in town about an hour later and I’m surprised at how tired I feel – I’ve been trying to keep pace with a bunch of elite runners who make it all look effortless. The enthusiasm I saw today, though, has rubbed off on me. Instead of fantasising about falling into bed, I’m already planning my next run. It may or may not include a forward roll. 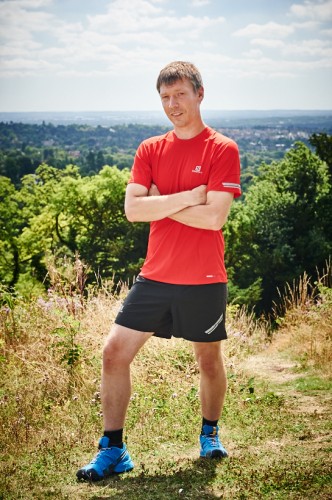