MR takes on the Tough Mudder 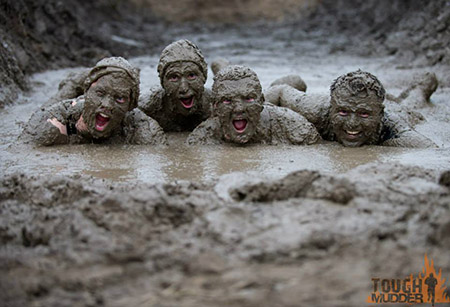 Despite being renowned for being a ‘friendly’ distance in running circles, half marathons can become an ever so slightly mundane activity for the ambitious runner. After your third 13.1-miler where you felt strong at the finish line and could have possibly trudged on a little further, maybe it’s time to mix things up a bit. Tough Mudder, who have had in excess of 1.3 million participants to date since their inaugural race in 2010, could be the answer you’re looking for.

I will confess, I’ve never done a half marathon before or even a 10K – in fact, I haven’t actually taken part in a single running race that was completely from my own making. I’ve been into sport and kept active throughout my life though, and over the last three years I have used running – like countless of other people – to relieve stress and feel better about myself. It was time I took running to the next level and achieve something, so when the opportunity came to take part in Tough Mudder I would have been mad to turn it down (especially because I could do it for free).

Drifting my eyes across the race information, I saw under race type was written ‘multi-terrain’. This could well be one of the biggest understatements of the century. If pools of water, knee-deep mud paths, forestry and general off-road madness doesn’t constitute multi-terrain racing then I honestly don’t know if anything will. All that aside, it was tonnes of fun and the camaraderie of the day was one I’ll never forget.

I was surprised at the sheer size of the event at first. Not really sure why I thought that considering the first ‘Mudder’ was held in New York in 2010 and has since gathered pace in Germany, Canada, Australia and the UK. There were more than 55 scheduled Tough Mudders in 2014 so I think it’s safe to say the world’s gone Mudder-mad.

But anyway, back to my race. If I was slightly nervous about what lay ahead over the forthcoming 12 miles, the pre-race battle cry quickly dispelled any negative thoughts. Mudder generals on megaphones pledged to us that, “It’ll be tough, it’ll be wet, it’ll be muddy… But whatever you do Mudders, you do not give up. HOO-RAH!” It was just what I needed; I saw the pictures of people crawling through rivers and walking like orangutans through dense mud, but now – with adrenaline pulsing through my veins – I was ready, and off I went alongside 1000 other people on the 11am wave.

1.5 miles in, after already negotiating some tricky inclines and declines, we hit our first obstacle of which there were countless. Amongst the climbing over haystacks, diving into mud-infested “sewage” tunnels, slippery monkey bars, rope climbs and arduous mud walks there were some definite highlights that massively stand out. The first that springs to mind was the Arctic Enema – an obstacle that consists of a large skip (like the ones on a building site) full to the brim with freezing cold water and ice. In order to get from one side to other, we had to completely submerge ourselves in it. It was not a very nice experience to say the least and the relief I felt when I eventually clambered my way out of there was considerable.

Just after that they completely soaked us through came a nice dose of Electroshock Therapy, just because the conduction of electricity is that little more substantial. How kind of them. It didn’t involve much; just masses of dangling electrical wires that were virtually impossible to avoid, despite my crawling efforts. But again, fantastic camaraderie and it was great fun.

Another fierce obstacle that deserves a mention purely for its absurdity and simplicity would be Walk the Plank. Just as pirates used to plunge the distrusted into the depths of the Atlantic, it’s easy to see where Tough Mudder got their inspiration from. A jovial looking marshal, having the time of her life, counted down from three and if you hesitated you would get pushed in anyway. The drop was a generous six or seven metres I’d say, straight into a deep and dirty pool of water. 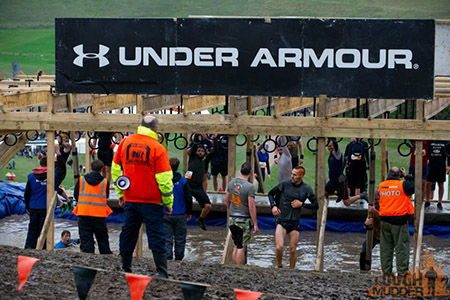 But the last conundrum we came across, a final hurdle to drag our bruised and battered limbs over, was the infamous Everest. It resembled everything Tough Mudder is in a nutshell; teamwork, fun and complete and utter madness. As it was the shape of an elongated half-pipe and too steep to make on your own, fellow Mudders had to pull you up the final part of the obstacle. A flat-out sprint was required to gather momentum – something that wasn’t easy after 11 miles – then a complete leap of faith in the hope that your teammates would grab you and haul you up. Thankfully I caught the eye of a couple of strong-looking blokes who saw me coming and did the selfless deed.

It would be wrong for me to say that anyone and everyone can do Tough Mudder, because they can’t. Shortly after Arctic Enema I saw a fairly slim guy built like a Kenyan long-distance runner on the floor, shaking, clearly suffering from hyperthermia. Within seconds a van armed with copious amounts of first aid kits came to help the man, which is a fantastic service don’t get me wrong. There was something alarming about it, however. The nurses on-board the van were saying, “we’ve got another hypo,” like it was happening regularly and that it was a run-of-the-mill thing. That can’t be a good thing, can it? “Oh look, there’s another one who’s suffering from a sometimes severe and life-threatening illness, I’ll finish my lunch later.” It didn’t sound right to me.

I have my Under Armour kit to thank for me not suffering the same fate. My shorts and tight t-shirt were predominantly made of nylon that dries quickly and will keep you slightly warmer than other fabrics. I saw people wearing cotton t-shirts – a big no. The mud and water will absorb into it making you heavier so don’t go there. As shoes are concerned, go as light as possible. One last piece of advice I’d give would be to wear ankle support: I rolled my left ankle half way through but thankfully it wasn’t anything serious, but the threat was there.

Despite my moans and groans about potential injuries, I would say you have to do at least one Tough Mudder before you die. It’s not designed to be easy after all. What I’m about to say is borderline nauseating, it’s that cheesy, but I’m going to say it anyway. Here it goes: you’ll probably make some new friends along the way as I did, who helped me massively in conquering the climbs and crawls.

Become a Mudder and join the millions who have already joined the ‘legion’, as they like to call it, you will not regret it.

About the Author: David Castle