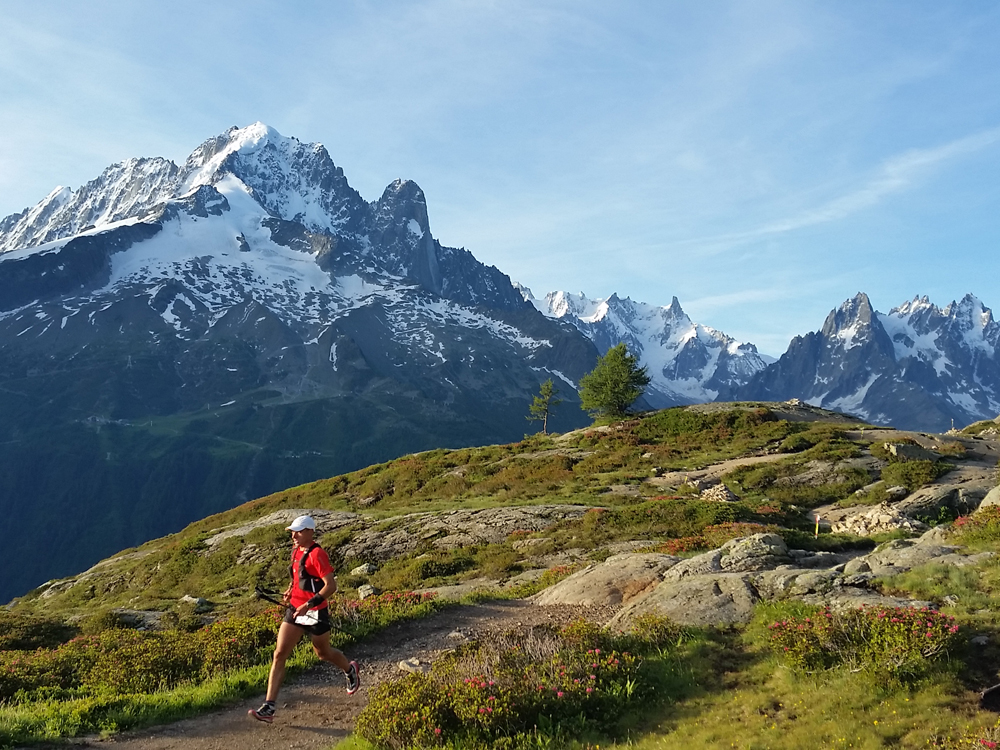 It’s 3:30am on 26 June. I’m in the alpine town of Chamonix, stood in front of the inflatable arch that marks the start of the Mont Blanc 80K, surrounded by a throng of fellow sleep-deprived journalists and photographers. Behind the arch, the atmosphere is considerably more electric. Close to one thousand athletes – heavily laden with trekking poles, hydration packs and energy gels – are huddled together, shuffling nervously from side to side. They’re about to take part in one of the most technical ultramarathons that Europe has to offer.

Since its inception in 2013, the Marathon du Mont Blanc, as it’s also known, has established itself as more than a mere prelude to the region’s signature event, the 100-mile Ultra-Trail du Mont-Blanc (UTMB). With 6,000m of vertical climbs – most of which are on steep, rocky, unforgiving terrain – it is a race reserved for both the crème de la crème of ultrarunning and the very brave.

Hiking up to await the athletes at the 20K mark, it’s clear why this is regarded as one of the Skyrunning World Championship’s most testing events. Avoiding rocks, keeping the perilous drop a comfortable distance away, and contending with the breathing-related difficulties of rising altitude, is hard enough at walking pace.

The view from Tete aux Vents, though, is nothing short of spectacular. 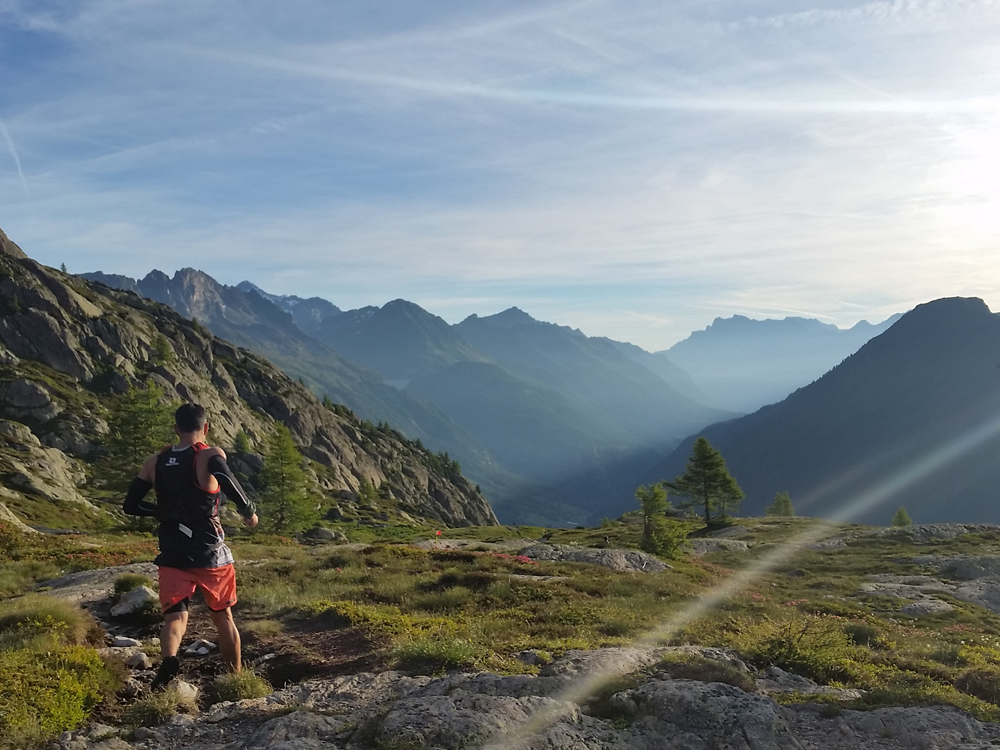 At around 6am, a couple of hours after setting off, the elite runners begin to crest the horizon, having already tackled over 2,400m of ascent. Next up is the tricky descent to the Buet and the 25K mark, which offers little respite to already tiring legs, but does throw up a few photo opportunities for the struggling-to-keep-up journo…

The Italian, Franco Colle, takes an early lead and, after the torturous climb to col de la Terrasse and the descent to the vast Emosson dam, maintains it at the 40K mark. Hot on his heels, though, is the American, Alex Nichols, who looks to be a lot more comfortable.

From the much-welcomed aid station at the halfway point, a short climb from the dam, the runners – who by now are dispersed massively – begin the descent towards Gietroz and Chatelard – postcard villages of typical rural French beauty.

As the front runners reach the 50K point, the heat of the midday sun is relentless and, as the course opens out to the expansive grassland and wide-ranging mountain views of the Ardoisieres trail, several competitors make the painful decision to drop out, unable to contend with the fact that 30K and two more leg-numbing climbs still remain. 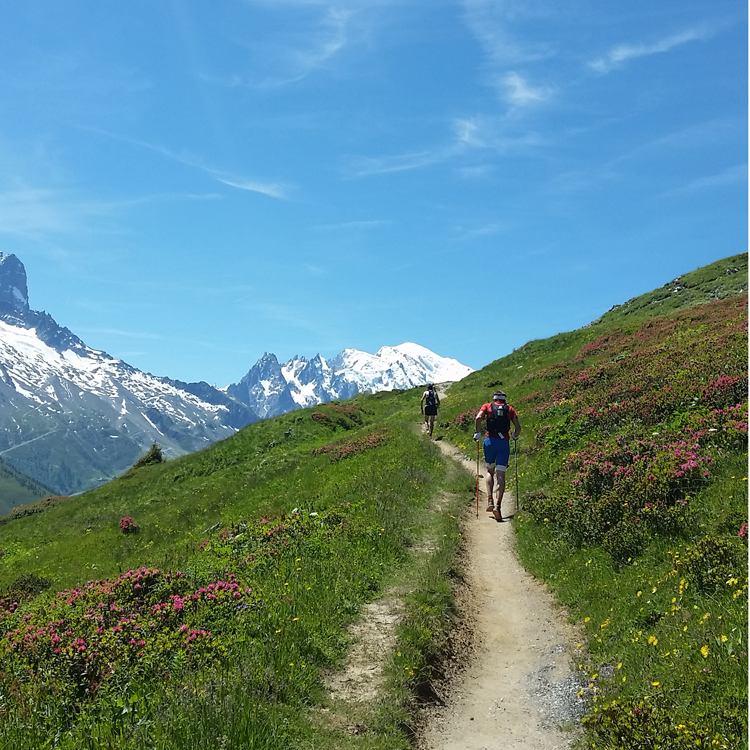 A steep, winding descent to the village of Le Tour is less demanding than other sections of the course, but the spiraling trail places a lot of unwanted stress on the knees, which seems to have got the better of a couple of limping runners in the village below.

It’s on the northern balcony trail climb toward the Planet village that Nichols, who has been keeping Colle firmly within his sight, makes his move. Colle, whose legs look to have nothing left, cannot respond and, as we return to Chamonix to await the winner, it is Nichols who is greeted by a corridor of cheering supporters – having tackled the final climb up to Montenvers and descent through the Arve Valley – crossing beneath the same arch that he set off from a little over 10 hours and 30 minutes earlier. 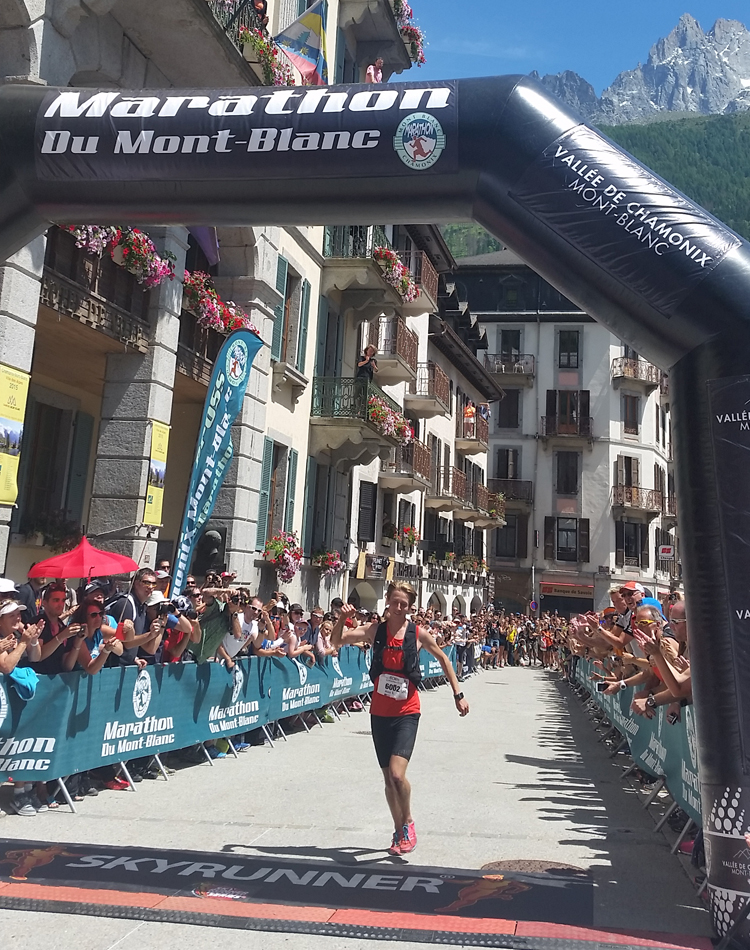 Colle holds on to second, crossing the line 30 minutes later and, flying the flag for Great Britain, our very own Andy Symonds comes in just two minutes behind.

Speaking at the end of the race, Nichols – who finished third in the 2013 Skyrunner World Series – says it was always his intention to hold back until later on in the race:

“I wanted to make sure I was still feeling good for the second to last and the last climb, because they’re very very difficult.

This race is completely different to other ultras, just because it’s so mountainous, and I really appreciate that.”

Colle, meanwhile, said it was a “dream come true” to finish in second place, in a race that manages to combine both pristine beauty with a brutal test of physical and mental endurance.