What Makes a Great Trail Race? 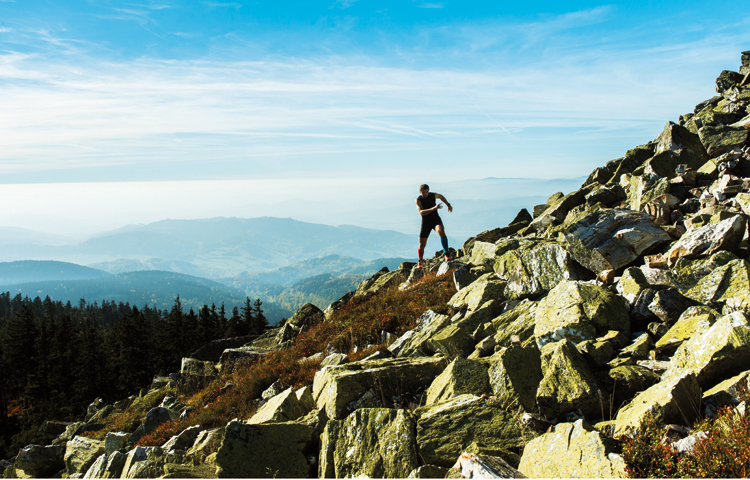 A good trail race will invariably take in some amazing scenery

Landscapes can offer a blank canvas on which to project your pains, thwarted aspirations, mini revivals and endeavours. Plunging valleys, long descents, traverses, wooded valleys, scree, archaeological scars, dramatic skylines and long ridges can all leave their mark. Add variety to this list and you have yourself a heady mix.

Top fell runner and inov-8 athlete Ben Abdelnoor loves that variety. “It has to be undulating,” he says. “I never like it to be flat for too long, nor the same type of terrain. A bit of road is fine, so long as there’s mud, gravel, grit and grass, too.”

Abdelnoor says the views offer a unique selling point, because “the best races are the ones where you look at the views and decide you want to come back and walk the route!”

Scanning the hundreds of Facebook comments after this year’s Grizzly, a 20-mile trail run in Devon, the brotherly (and sisterly) love is palpable. Tales of runners helping one another abound.

A woman was carrying a tribute for a departed friend, who had run the Grizzly several times, but had accidentally dropped the tribute along the way. Another runner found it, realised what it was, took it with her and placed it on the memorial. She was able to contact the original lady via Facebook, to let her know the tribute had been placed on the memorial, and others were able to provide photographs.

Elsewhere, the Highlander, a two-day marathon, is famed for its mid-way Ceilidh. Whatever race you enter, make sure it has a similar sense of camaraderie.

As a race organiser myself, I’ve made this my mantra: an event is only as good as its marshalls. Dave Thomas, organiser of the Grizzly, would say the cheerful marshalls out on the course help to make his event unique. Some turn out in fancy dress, others pick up an instrument and play, while others return from their kitchens with things they have recently baked.

Centurion Running in the South of England is similarly renowned for its top-class marshalls – in fact, there’s even a waiting list to become one.

Top trail runner Ricky Lightfoot believes the race-day announcer is another key figure. “To me, this is one of the most important parts of a great trail race,” he says. “The speaker is the heart and soul: he keeps the crowd going and is the last person to see you off and the first to welcome you back.”

I call trail races foreign tattoos, because the memory stays with you for a long time afterwards and can often be just as painful. Whether your trail running tattoo was branded in the Canary Islands, South Africa or North America, make sure the event has something uniquely interesting about it.

As Tobias Mews, a serial adventurer and author of 50 Races to Run Before You Die, says, “If you’re going to hurt yourself, you may as well do it somewhere nice.”

5. A sense of adventure

Anyone tackling The Spine Race knows what to expect: incessant cold, howling winds and snowfall. But it’s these hostile conditions that make the race the preserve of an exclusive band of hardy runners.

Going off-road allows you to embrace your wilder side, so set yourself an ambitious but achievable challenge. As the legendary Australian running coach Percy Cerutty said, “You only ever grow as a human being if you’re outside your comfort zone.”