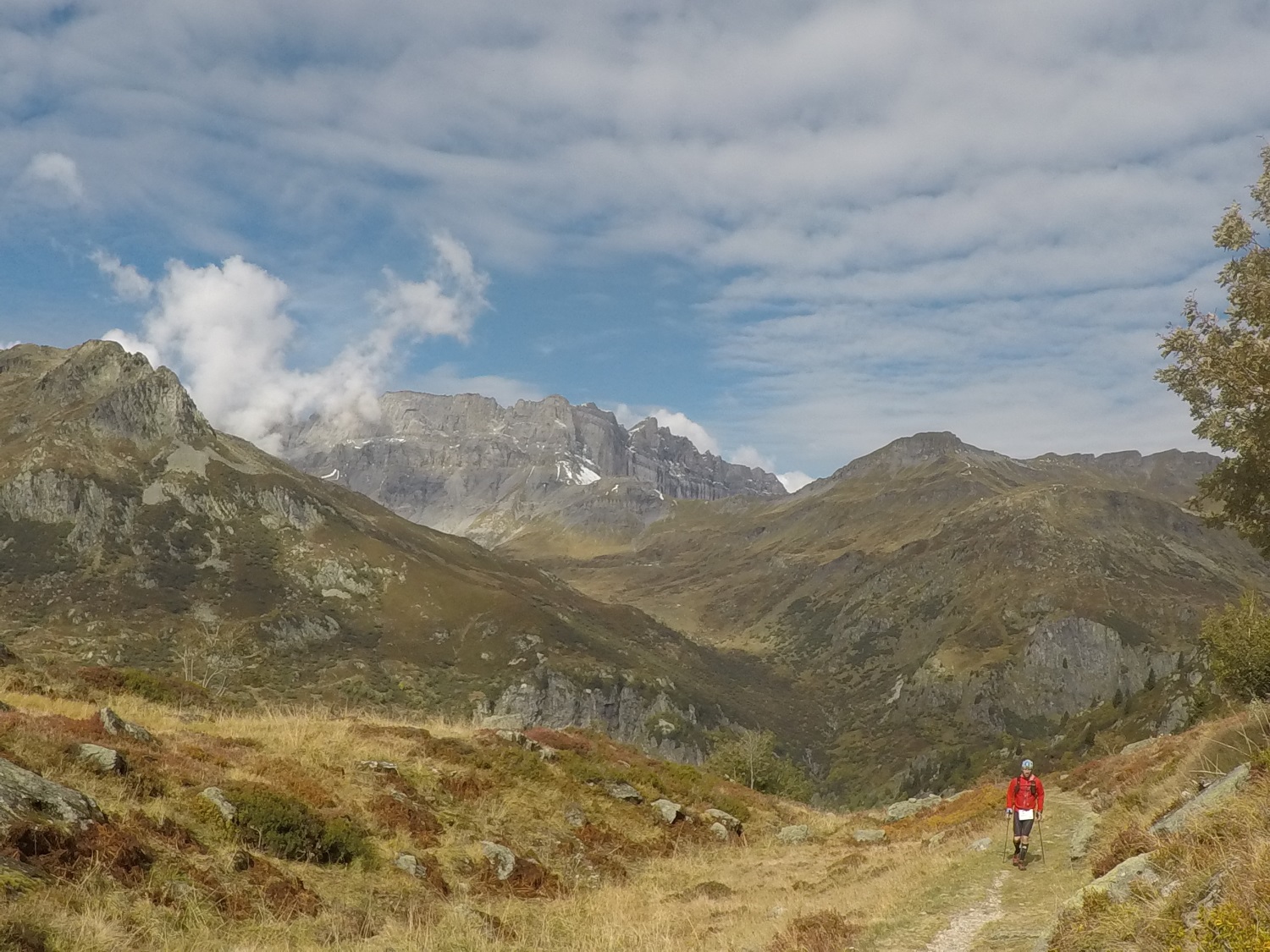 “It’s much tougher than the CCC!” I heard this more than once in the lead up to the Trail Aiguilles Rouges (TAR), but having run a few 100K races (including the CCC), how hard could 50K be?

The first section of the race was a 9K slow ascent up to Flégère, covering 1,300m vertical. The trail initially passed through the woods on a narrow path – so narrow that on a number of occasions the field bunched to a halt as it slowed to cross scree slopes or streams across the path.

From Flégère, the route continued along the final sections of the UTMB and CCC races, down a rocky descent to Col des Montets.

Up to this point, we’d been running in the dark, but dawn arrived and the headtorches went off around 7am when I reached the col. A more gentle path alongside a mountain stream then took us down to Buet, 15K in and the site of the first aid station.

The usual Savoyarde selection of charcuterie and cheese was on offer, plus chocolate, apricots and warm, salty soup. I quickly topped up my water and left Buet, heading up past the beautiful waterfalls at Cascade de Bérard.

Once past the café at the bottom of the Cascade, the TAR route takes runners into wilder and less frequented terrain on the 1,150m ascent to Col de Salenton.

Firstly passing through mossy forest trails, the route opened into a beautiful remote valley that become increasingly rocky the higher we ran.

By the time we neared the col at 2,526m, the ‘trail’ was more a set of linking boulders and there was even some scrambling before we trudged through the snow, over the top, and slid down into the next valley.

The bad weather in the lead up to the race had meant that there was snow over the higher passes and the course had been changed to avoid the worst of it.

The descent from Col de Salenton was a mix of slush and mud, but my Brooks had enough grip to keep me moving forward and I went straight through the second aid station focused on the final ascent up to Brévent.

It was only 9K and I was confident I had enough water to see me to the final aid station just past the peak.

That was a mistake. It was a warmer day than I’d given it credit for (reaching 19°C in the valley floor) and the slog up to Brévent took longer than I’d imagined, not helped by the course changes that also meant more queues on narrow trails.

Fortunately, snow is only frozen water, and as we neared the top I had a ready supply to hand.

According to the course map, from the last aid station it was just 10km to the finish, starting with a final 400m vertical ascent and then a steep 1,600m drop to the finish at Servoz.

Down but not out

I’ve never been a fan of descending but when talking before the race to Luc Verrier – head of the UCPA in Argentière – and Robbie Britton, both had stressed the importance of technique when running downhill.

I tried to keep my weight forward and think positive, but I still need more practice running downhill for two hours non-stop to do it without trashing my quads.

The final descent was on soft forest paths, rather than the punishing rocky trails from earlier in the day, but the ‘10km’ to the finish somehow expanded to 15K (perhaps due to the course changes) and yet again I ran out of water!

This time nature saved the day again as I topped up from fresh and cold mountain streams along the way.

I tried not to focus on the finish line, but I was very happy to reach Servoz, a pretty town on the outskirts of the Chamonix valley after 11 hours 34 minutes.

Putting it in context that’s roughly 750m vertical per 10K for the TAR, compared with 600m per 10K for the 101K CCC. So while the latter remains a harder challenge overall, ‘mile for mile’ the TAR is tougher.

The TAR is worth four UTMB points, and while there are probably easier ways to rack these up, if you’re looking for a well-organised trail challenge in a stunning location, then the Trail Aiguilles Rouges would be a great choice.

Iain Martin stayed at the UCPA in Chamonix, booked through Action Outdoors. He works part-time for Profeet, who provided his trail shoes and custom insoles.

About the Author: Iain Martin