When your heart-rate monitor gives up the ghost on the first climb, you know you’ve gone a little too hard.

The 2018 World Trail Ultra Championships are going to hosted by the Penyagalosa Trails in Southern Spain, in-between Barcelona and Valencia, so my girlfriend, Nats, and I decided that heading to the 2017 edition of the 63K MiM would be a great way to start the season. Net uphill is always fun.

Given that this was my first race back from a knee injury it was also a proof of fitness for British Athletics as part of my selection for the 2017 World 24hr Champs in Belfast – all I had to do was make it to the finish comfortably, but that’s no fun sometimes.

Hurtling onto a 400m track in Castellon de la Playa at 5:59am, tardy as ever, the air was cool for Spain and thankfully the race provided arm warmers all round.

The first two hours weren’t very warm in the shade of the valley, but the sun came calling soon, although by that point there were other problems.

Every European race you see there are a bundle of climbers who just hurtle up the hills and seem to be working full bore throughout.

The curious voices in my head wanted to know if this was just a better way of racing, going wild on the ups and chilling on the downs.

So after providing some solid advice of “start easy and push in the hillier last 30K” to Nats, I set off at what can only be described as moron pace.

The race takes roads out of the city and then hits the first rocky ascent in the dark, leaving me grateful for the Petzl headtorch I only remembered at the last minute.

Apart from Andrejs Jesko, setting off at true Latvian pace, there was a small group of us at the front, all seemingly working hard.

Well, all but Miguel Caballero, eventual race leader, who seemed out for an Sunday jog. Ominous.

What followed was a beautiful, but painful, tour of the Penyagalosa National Park.

Many of the uphills were runnable on this fast course, with the downhills mostly loose, rocky and steep.

It suits a certain type of runner, one with a great engine and a true ability on the gnarly stuff downhill.

Blowing up is never fun, but food and drink went well and energy was there for the ups, but my running legs were left behind on that first climb. Experiments sometimes go wrong.

The race rose up through mountain towns and villages and the Spanish people once again showed just how brilliant the support is for trail running, with crowds at every town and people supporting in the middle of no where.

It’s always a pleasure to run in Spain, even on a bad day.

With 3,000m of climbing throughout the race there was always more up and the final uphill was a joy to behold.

Steep and long, this wee man got into his pain cave and trotted on up, just like the trails back home, before one final descent to the finish.

Once again, miles away from anywhere else, there was a great crowd at the finish of runners, families and friends, cheering on everyone coming through.

The 2018 World Trail Champs may be on a slightly longer course (80K) but they will still be fast and it will make for a great race.

Go out too hard and you’ll not have the legs for the runnable sections, but go out too slow and you’ll never see those Spaniards again. Muy Rapido!

If you’re after a taste of European racing, with a fast start, rocky trails, great support and a goody bag full of stuff that’s actually useful, then maybe Penyagalosa is a good way to start your 2018, too.

There’s even a 116K race if you’re feeling punchy.

Robbie with a look that simply says, “Ouch” 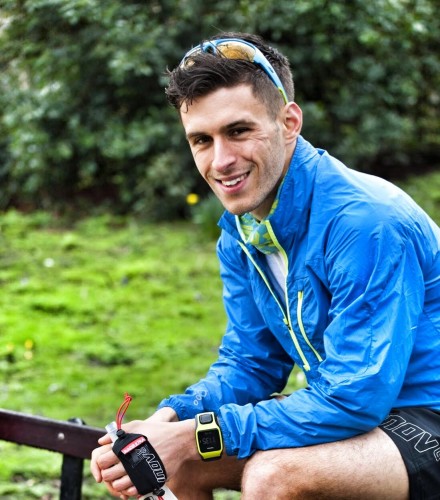