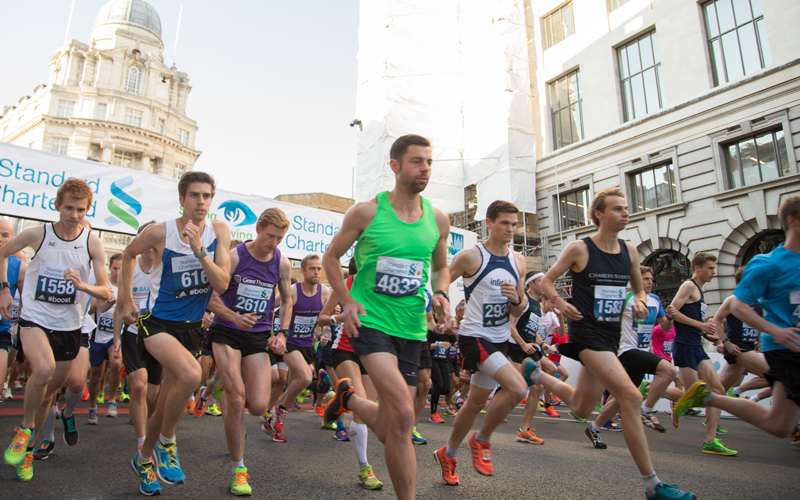 I’m all for an extensive pre-race warm-up, but as a result of an incredibly untimely tube strike, I arrive at the start line of arguably the largest 5K in the country having already covered five miles by foot. Luckily, I’m a glass half-full kind of guy, and at least now I have the perfect excuse for the inevitable failure to meet ambitious pre-race predictions.

Now in its eleventh year, the Standard Chartered Great City Race has established itself as a firm fixture on many Londoner’s race calendars. A company-only event, each business must register a minimum of four entrants as either a male-only, female-only, or mixed team (two men, two women). The top four times from each company’s team are then collated to give an overall time, with the disgraced slowest runners taken away and handed their P45s.

The combined Men’s Running and Women’s Running team this year consists of editorial director, David Castle, digital writers for each mag, Tom Bristow and Jenny Bozon, senior marketing exec, Paul Clayton, WR’s Consultant Editor, Tina Chantrey, and myself. As we shuffle nervously on the start line, surrounded by some 5,000 runners from 349 other companies, I can’t shrug the feeling that my sub-19 prediction was embarrassingly wide of the mark.

In every race I enter, I have an unfortunate habit of setting off like I’m a young Haile Gebrselassie – today is no exception. Having stayed with the lead pack for the first 500m, I knew I was in trouble when David, the footballing equivalent of Barcelona to my Leyton Orient, appeared in the corner of my eye. Obviously, though, slowing down wasn’t an option. This is a race; I’ll be able to hold on.

3K in, though, having passed such iconic landmarks as St Paul’s Cathedral, Guildhall and the Bank of England, my stomach is cramping and people are storming past me at will. “Just over a mile to go,” I tell myself. “You can’t stop. It’s a 5K for **** sake!” With this thought, in an act of merciless cruelty, the runner in front of me settles for a walk and I’m filled with the greenest of envy.

The kilometer stretch along London Wall lasts an eternity and it’s made worse seeing the front-runners stream past in the opposite direction, so much closer to the finish than I. Finally, the 4K marker springs in to view and I attempt to speed up from snail’s to tortoise’s pace. Four minute’s and the most feeble sprint finish in history later, I cross the line in 20mins 21secs – almost 90 seconds slower than hoped and 45 seconds off my dubiously-measured PB.

Despite having a personal shocker, that is no reflection at all on a race that is understandably popular. It’s one of only two races in the capital (the other being the little known London Marathon) able to ensure complete road closures and the flat-as-a-pancake route provides the perfect opportunity to clock a quick time – as proven by Phil Wicks of Allianz, who raced to victory for the eighth time in 14mins 43secs. 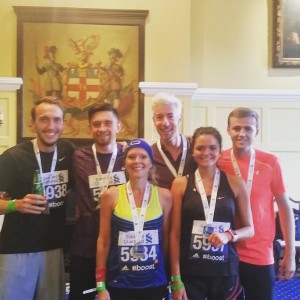