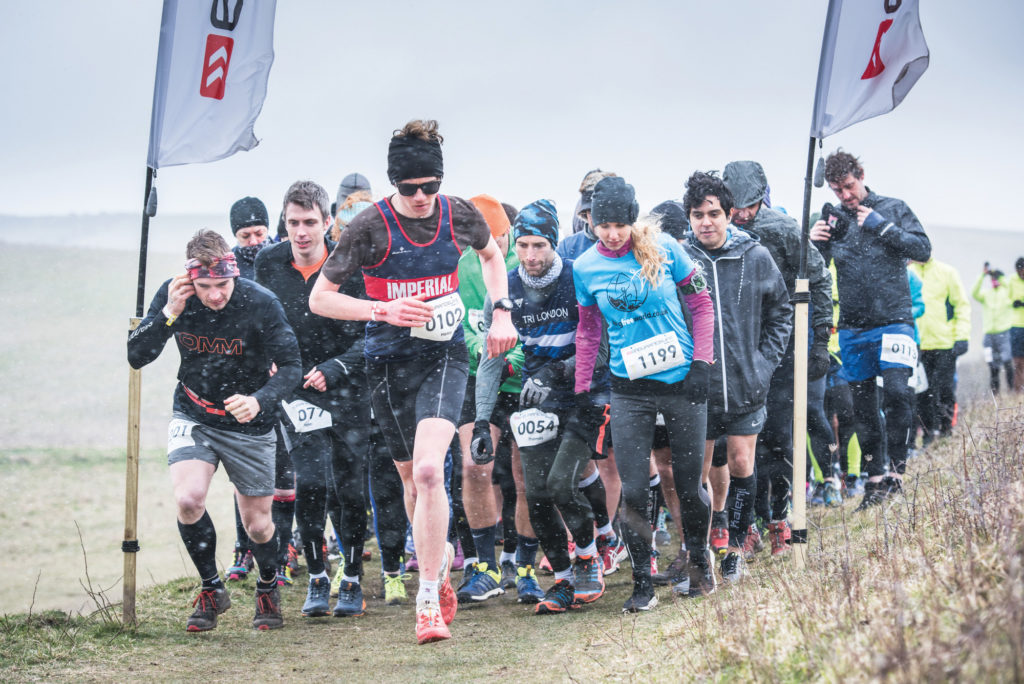 Half marathon runners, you’ll be getting underway at half 10,” says a bearded man with a microphone. He’s addressing a tent full of very cold runners—and this isn’t what we wanted to hear.

I’m one of several hundred shivery souls at the Endurancelife Sussex Half—one race in a series of UK-wide trail events renowned for being really quite hard. Although nothing on Endurancelife’s Snowdon Quarter (49 miles / 9,150ft of ascent), the Sussex Half does still feature some fairly intimidating lumpy bits (chalk cliffs known as the Seven Sisters) and typically blowy coastal weather. Indeed, today’s race coincides with a fleeting visit from the ‘mini Beast from the East’: a cold snap sweeping in from Siberia. (Excuses, I find, are best delivered early.)

The start is at Birling Gap—rugged, windswept, beautiful; also, middle of nowhere—and, anxious of the fact that Uber is yet to infiltrate these parts (we’d have to use a traditional mode of transport called a ‘taxi’), my mate Jack and I got here in incredibly good time/way too early. It’s amazing how slowly time can pass when you’re slightly nervous and freezing cold in a cramped tent in East Sussex (there’s a proverb in there somewhere).

Eventually, after two hours of frantic hand warming, we half marathon runners (there are also 10K, marathon and ultra options) are led to the nondescript start line 100 metres or so from race HQ. Often I follow the old adage, ‘dress for the second mile’, but today I have a thick, insulated coat on, with the hood drawn tightly over my head (think Kenny from South Park). Jack, meanwhile, has pulled his snood fully over his face—like a burglar who’s either very lost or is hoping for a lucrative haul at the National Trust café. Several runners around us are dressed as if this is a mid-summer parkrun, but that’s irrelevant: I can see the fear in their eyes. These two mean business, they’re thinking—what athletes.

The opening few miles—away from the sea, to the village of East Dean—are about as rude a start to a race as I’ve experienced. Halting headwinds, stinging sleet, some big ups and small downs make for a chastening, lung-busting introduction. Such was the ‘head down, get through it’ nature of the first 5K, Jack and I barely said a word, but with a mercifully downhill section ahead of us, I’m able to catch my breath and express my thoughts in typically elegant prose: “F***ing hell that was hard.” It’s hard to hear Jack’s muffled reply, but I get the sense he agrees.

Miles three to six feature a return of feeling to my fingers and a gradual acceptance that this isn’t a race for flat-terrain enthusiasts. Sudden uphills follow sharp descents as we hug the steep chalk cliffs. Bill Bryson describes this landscape far better than I could, as a ‘hazy infinity of rolling hills…a world of simple, bright elements: green land, white cliffs, deep blue sea’. The hills certainly seem endless, but this isn’t a day for bright colours or, indeed, looking out to sea.

Isaac (right) and Jack take on the Beast from the East

However, despite the fact much of my view is restricted to the few metres of trainer-trodden ground ahead of me, I begin to enjoy the ridiculousness of the situation. Whenever I’m struggling during a tough run, I find it helpful to take my mind away from the pain and realise that I actually chose to be doing this. It doesn’t make legs hurt any less, but it does make it all feel much more fun.

Mood lightened, I’m even able to enjoy the longest climb of the race. Two miles and 383ft of ascent takes us to just before the seven-mile marker at Beachy Head. A much-needed chunk of Soreen malt loaf (rocket fuel) halfway up the climb sends sugar levels through the roof and Jack and I career down the other side more recklessly than might be advisable.

Approaching mile eight, the until-now soft, grassy trail makes way for gravel road as we come down off the cliffs to a checkpoint on the outskirts of Holywell—where a jolly marshal is there to greet us. After taking an impolite amount of chewy sweets and salted nuts, he shouts after us with a morale-boosting message: “Last climb. Five miles to go!”

A long, winding trail leads us up through dense scrub and back out onto the open expanse of downland. The weather has abated its assault, and the final miles tick by—pleasantly for us, but perhaps less so for the purposes of this report—without incident. We pick up the pace through a long, muddy field; and we get slightly disappointed when the finish comes into view, and then disappears as the route veers left. But before long we’re bearing down on a copse of woodland that we had looked out on from the cold comfort of the tent two hours earlier.

Plodding across the line, we collect our satisfyingly chunky medals, gather our bags and brace ourselves for what turns out to be crushing news: the distance to the nearest pub.