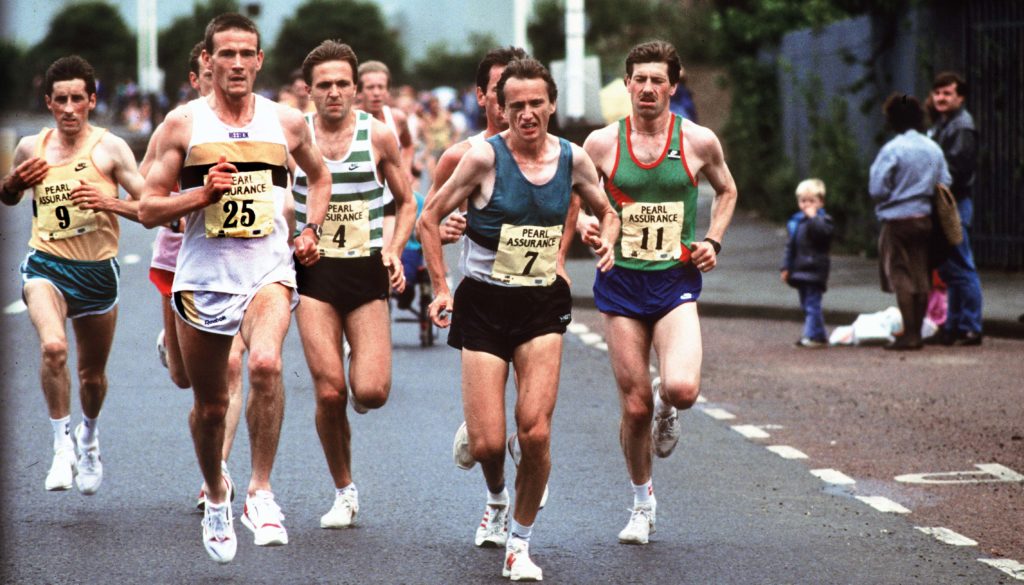 Steve Jones was born on 4 August 1955, and raised in Ebbw Vale, Wales. He began running cross-country as a 15-year old in 1970 and later became an aircraft technician in the Royal Air Force. Beginning as a steeplechaser for the RAF team, Jones progressed to the 5000m and then the 10,000m track events.

He returned to Chicago the next year and won again, this time in 2:07:13, his career best marathon time. His time remained a British record for 33 years until Mo Farah bettered it in 2018. In the 1985 race he crossed the half marathon point in 61:43, still one of the fastest half marathon splits of all time.

Key to Steve’s training were long repeats run by time, not distance, on the track, leaving him flexible and free, prepared to respond to the competitive need of the moment or by sheer instinct. Brought up on the unpredictability of British cross-country, Jones never wore a watch, and even as a coach today he won’t allow his athletes to wear one.

Jones had a long career, spanning for approximately 25 years. During his peak he averaged 80-90 miles per week – not huge mileage for a runner of his calibre. Jones’ schedule was very simple and never changed too significantly. The cornerstone of his training was high- intensity, quality sessions.

For today’s top runners, running is their job. Not for Jones. After winning Chicago, Jones considered running full-time but instead carried on working in the RAF, starting at 8am and finishing at 4.15pm, even missing lunch to fit in training sessions. During the week, he would turn out for the RAF to race low-key events, while on Saturday he raced for Newport Harriers.

Jones might have made his name over the marathon but he was an excellent runner over all distances and surfaces. He finished 12th in the 1983 World Championships over 10,000m. But he also loved cross-country, building his strength through tough off-road races. From 1977, he only lost one Welsh cross-country title in the following eight years, also placing third just behind Carlos Lopez at the World Cross Country Championships.

Jones used to have a fairly unique sort of preparation: he liked to put himself in a position where he could run any distance anywhere at any time of the year. “Peaking is such a hit-and-miss affair,” he said. “My coach and I always believed that if I got in top physical condition I could race and win anywhere between 1500m and the marathon. I probably ran my best 1500 when I was training for the 10,000 and my best 10,000 when I was training for the marathon.”

Jones famously ran without a watch, favouring running by feel over pacing or splits. In 1985, he missed the marathon record by one second in Chicago: commentators at the time berated him for not knowing he was that close. Jones was unrepentant: “Why would I need a watch?” he said. “I didn’t need one to tell me I was slowing down or needed to speed up. The way I ran was to just run as hard as I could. The watch wasn’t going to tell me not to do that or to do more of it. Everything I did when I ran was instinctive. Could I have broken that record? Who knows?”

About the Author: David Castle