Lessons from a 1000 marathons 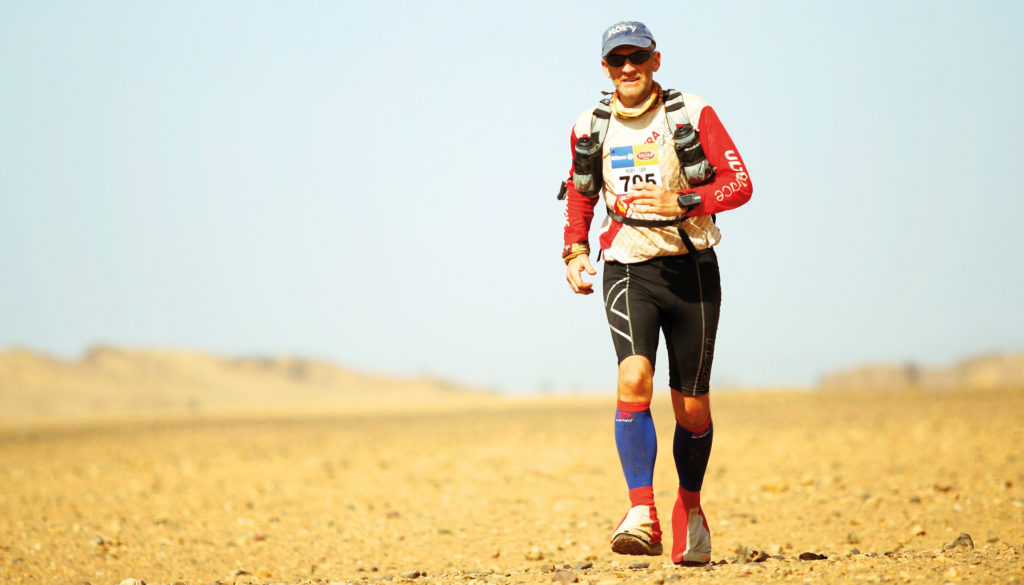 In 1994 I had an epiphany, a real Road to Damascus moment. I was 31 at the time, and I clearly remember looking in the mirror one day and not liking the person staring back at me. I felt toxic – I didn’t want to smoke or drink anymore, and I wanted to lose some weight. I thought, runners are thin. Maybe if I go for a run that could speed up the process.

I never set out to run 1,000 marathons or to coach people or run across the Sahara Desert. All I knew was on that day in 1994 I simply had to go for a jog. I ran 100 steps and I was flat out on the pavement. But I was totally euphoric because I’d found my therapy and the framework that I was going to hang the rest of my life on.

I was totally ignorant of how to train. I went for my first run in my work clothes wearing leather shoes, jeans and a puffer jacket – it was at least a month before I bought any trainers. The internet wasn’t available and there were no self-help books, so I had to work things out for myself. The initial results were amazing. You lose weight quickly when your body is used to doing nothing. I exercised every day and within three months I’d done my first half marathon. It was my local one in Stratford-upon-Avon, where in the past I’d stand outside my parent’s house with a pint of beer and a cigarette, and poke fun at the runners. Now I was one of them.

There’s something magical about 26 miles and 385 yards. The first marathon I ran in November 1994 was such an achievement. I wrote in my journal that it didn’t matter whatever else I did in running, no one could take the achievement of running that marathon away from me. I felt it was such a positive thing to do, all I wanted was to do it again. My next one was the 1995 London Marathon 56 days later and once I’d finished that I was hooked. Being in a field of 30,000 running around the Cutty Sark and Tower Bridge is such an iconic thing and had a real wow factor. I ran another one the week afterwards and I’ve been running one every week ever since. I’d think that if I didn’t do them, maybe I’d return to the old Rory Coleman who
I didn’t like very much.

Your favourite marathon is your fastest, which was my 15th, in Suffolk, where I completed the distance in 3:24:21. But the others are just as important and I can remember every one of them. Nottingham is my favourite road marathon – I did my 300th and 500th there – but it’s ones that frighten the hair out of your head that stick in the mind. The Atacama Crossing in Chile is a really tough race. You’re at 15,000 feet, there’s no air and volcanos are erupting on the horizon. There’s really no one else up there and it’s such an amazing place to be. I also raced 100 miles across the Jordanian desert with no map and no compass – again, really scary, but you find out who you are on days like that, as well as what’s important in life. Plus, they’re such good fun.

If you can make your passion your career it’s a huge bonus. In 2008 I’d come to a career break: I’d spent 25 years in print and brand development and come to the end of wanting to work for someone else. I thought, well I’m always teaching people how to run, so why not become a personal trainer? Although it’s difficult to return to school when you’re 46, I went back and did my qualifications. What had real value though were my 20-plus years of running. I always say my Guinness World Records hanging up in the kitchen are my qualifications, they’re what allow me to teach other people. I’ve been there, done it and got thousands of t-shirts!

In 2016 I was diagnosed with Guillain- Barré syndrome (GBS) where you get a virus and your body’s auto-immune system attacks the virus but then it fries your central nervous system too. So your brainwaves start off in broadband mode and by the time they get to your feet and hands they’re in dial-up or the signal is missing. You’re like a puppet with cut strings – I was paralysed from the neck down. The prognosis is basically, ‘nobody knows,’ so you have to find your own route out. It was like going for that first run again – if I could learn to stand and take one step I could then do 20 steps, 50 steps, 100 steps. It took me 21 days to learn how to walk again.

I’ve done 18 marathons since getting better again. The first run I did was a parkrun and it took me 58 minutes. It now takes me 27 minutes and I can run 10K in an hour and just over four hours for a marathon. So I’m not far off where I was before the GBS. I’ve probably got another couple of years of recovery left – I feel like I’m getting there now though. I’ve had to go through all the runner’s aches and pains again, but it’s been quite a cathartic process. I’m actually quite grateful to have gone through it as I’ve come out of it a stronger person.

I’ve run the Marathon des Sables 14 times, but this year was really special, as I didn’t think I’d be able to do it again. I did have a couple of quivering bottom-lip moments! The one thing I say to everybody is always take away the boundaries. We seem to put limitations on everything, not just in running but in life generally. I think it’s good to get rid of them every now and then, and just to see what happens.

I’ve met some amazing people along the way. I was invited to Buckingham Palace and I’ve been to Downing Street. Plus, I trained and ran with Sir Ranulph Fiennes for his Marathon des Sables attempt. I sometimes think to myself, “Gosh, I’ve been able to do all these things just because I ran a few marathons”. I’ve been very lucky.