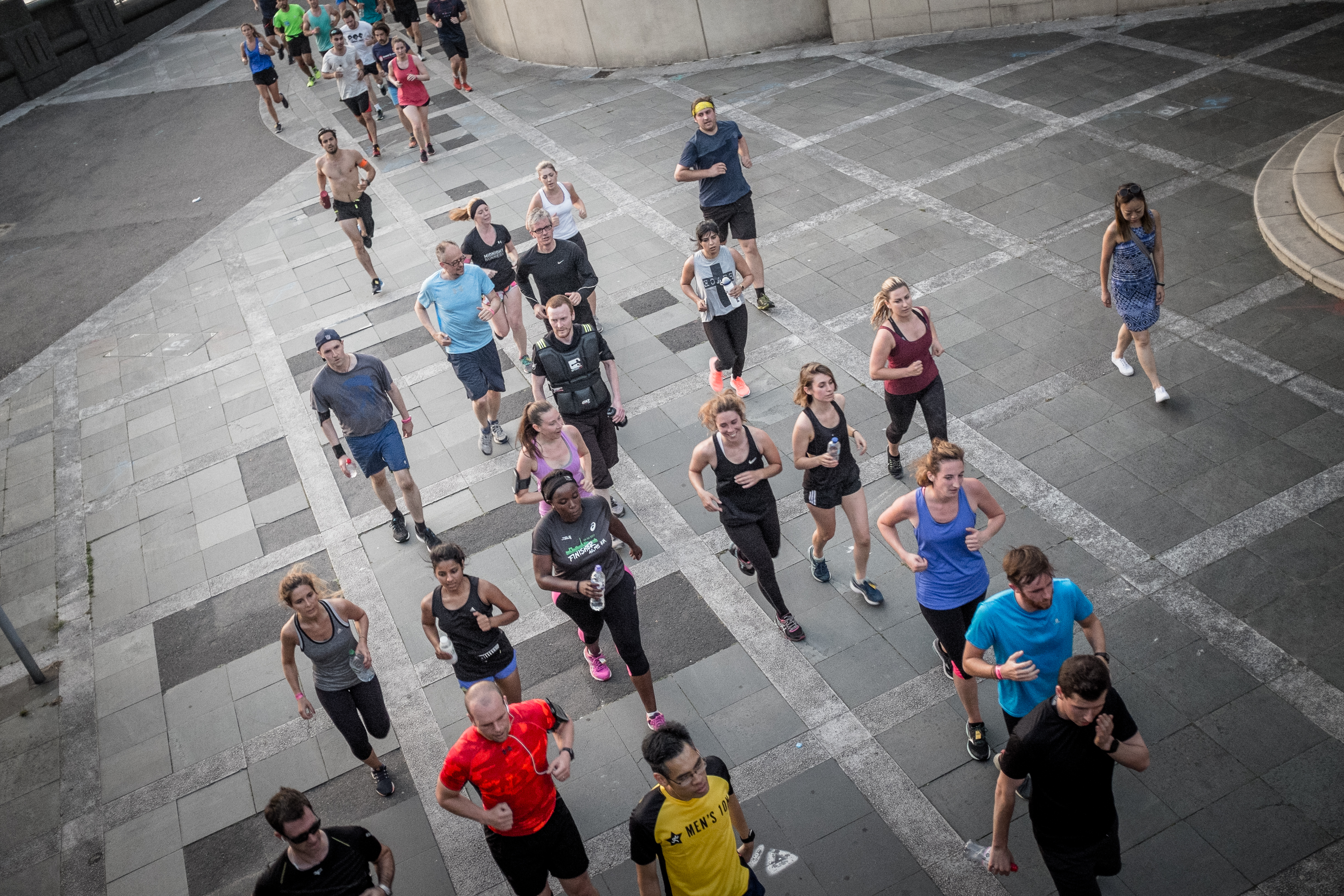 “It’s like being back in the army,” the guy next to me groans in the middle of a push-up. “Or like joining a fraternity,” another one laughs painfully. I just smile and raise myself up on my shivering arms, again and again.

Around us another 200 people or so are singing along, doing their best to synchronise their sweaty efforts with the beat pounding from the portable speakers. Hordes of tourists are passing by. Some of them are smiling, some are shaking their heads in wonder, and almost all of them are taking pictures of us.

It’s Tuesday evening, we’re on South Bank, close to the Tate Modern, and we’re on a 10K Boot Camp Run with the London Midnight Runners.

The Tuesday run is the backbone of the successful London-based club. Ten kilometres along the Thames and across a number of its bridges with five exercise stops — and lots of loud music.

The club offers plenty of other activities as well; track sessions, long runs, trails, and a number of unique charity runs, but the weekly Boot Camp Run is the flagship event, always attended by somewhere between 100 and 200 runners. And always followed by drinks at the local.

“It is. But it’s also a big party,” she smiles and takes off, leaving me behind in the middle of the field.

I’m a solitary runner. I sometimes run with my daughter in a buggy, but most of the time it’s just me. I don’t even listen to music.

I enter that weird, quiet place inside myself and stay there for a while, while my legs do their thing under me.

To suddenly find myself zipping down South Bank with hundreds of other runners, dodging tourists like I’m some kind of Super Mario, is very unfamiliar.

But it’s also a rush unlike any I’ve felt on my lonely runs. I feel carried by the atmosphere, the booming music, the smiles, and in a sense running has never felt easier. Or more fun.

The field is spread out over several hundred metres when we cross Waterloo Bridge. Some of the runners are taking it easy, having a chat, some are keeping a steady, sweaty tempo in the middle of the pack but others are downright sprinting.

That is entirely up to each runner, there are no set pace groups. As Greg Drach, one of the founders of the club, says:

“We try to make it more organic, so to speak. If, during the run, people want to speed up or slow down for a while, they can do that. I’ve seen people that joined us who started in the back, then started to run one or two segments faster, and suddenly be up front for the entire run. As I see it it’s a model that perfectly caters everybody.”

“Inclusiveness has always been at the core of what we do,” Greg says. “There are actually running groups in London that have application forms and processes. People can be rejected for a number of strange reasons. But the beauty of running is that it doesn’t matter who you are, what you do, where you’re from, or what language you speak. When we put on our running shoes we’re all the same.”

And what everybody here seems to have in common is the urge to celebrate running and fitness in a fun and slightly loud way. 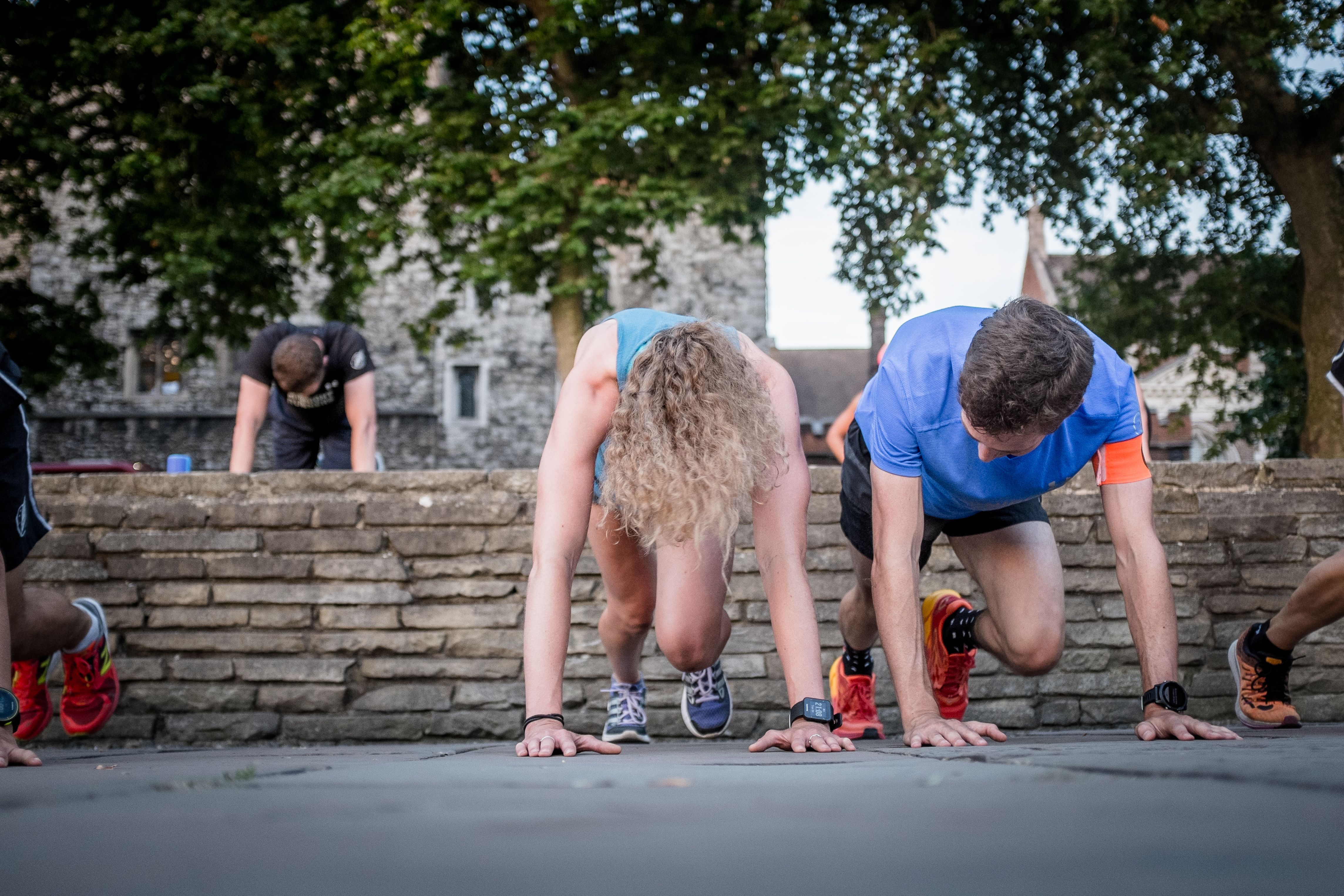 Core of the matter

A few kilometres and a couple of exercise stops later I’m really starting to feel the burn. A 10K can’t intimidate me but when you add a cocktail of pushups, burpees, squats and planks, it becomes a very different kind of beast.

When I round the MI6 building and climb the stairs to Vauxhall Bridge I feel like a bag of minced meat – and we’re only halfway.

I’ve always considered myself a decent enough runner, but as I turn down Millbank it becomes obvious that I have totally neglected the rest of my body, not least my arms. And up to this point, every time I’ve heard about the core and how important it is for a runner to keep it strong, I’ve told myself, my core is strong enough…wherever it is.

“How are you doing?” I ask a chap who looks to be missing a core as well.

I honestly don’t think he will. But some day. Perhaps. If he sticks around. In fact, these kind of athletic developments are not at all unheard of among the Midnight Runners.

“Last year 30 people from our group signed up for Race for the Stones, which is a 100K ultramarathon, and all of these people just went ahead and became ultramarathoners. And a lot of them started out with our regular 10K event. That blew my mind!” Greg tells me with a proud grin.

“But”, he adds, “we’re not a couch to 5K club, so to speak. You need to have a bit of running under the belt if you want to join us. At least be able to run 10K, you know. But there’s a lot to gain, I think. If you participate in every event during a year you’ll end up running more than 1,000 miles!”

Interesting. That’s exactly the distance my legs have covered this evening, it seems, and exactly how far they have to go before I can replace my water bottle with a bottle of beer.

Later, at the pub, I’m surrounded by the smell of fresh sweat and acrid running shoes, but also by laughter and an incredibly warm, friendly atmosphere.

I suddenly realise that the two blokes from the first exercise stop were both right: it is like being back in the army and it is like joining a fraternity.

It’s the best of those worlds: it’s training and togetherness. And music, always music. Also, drinks. 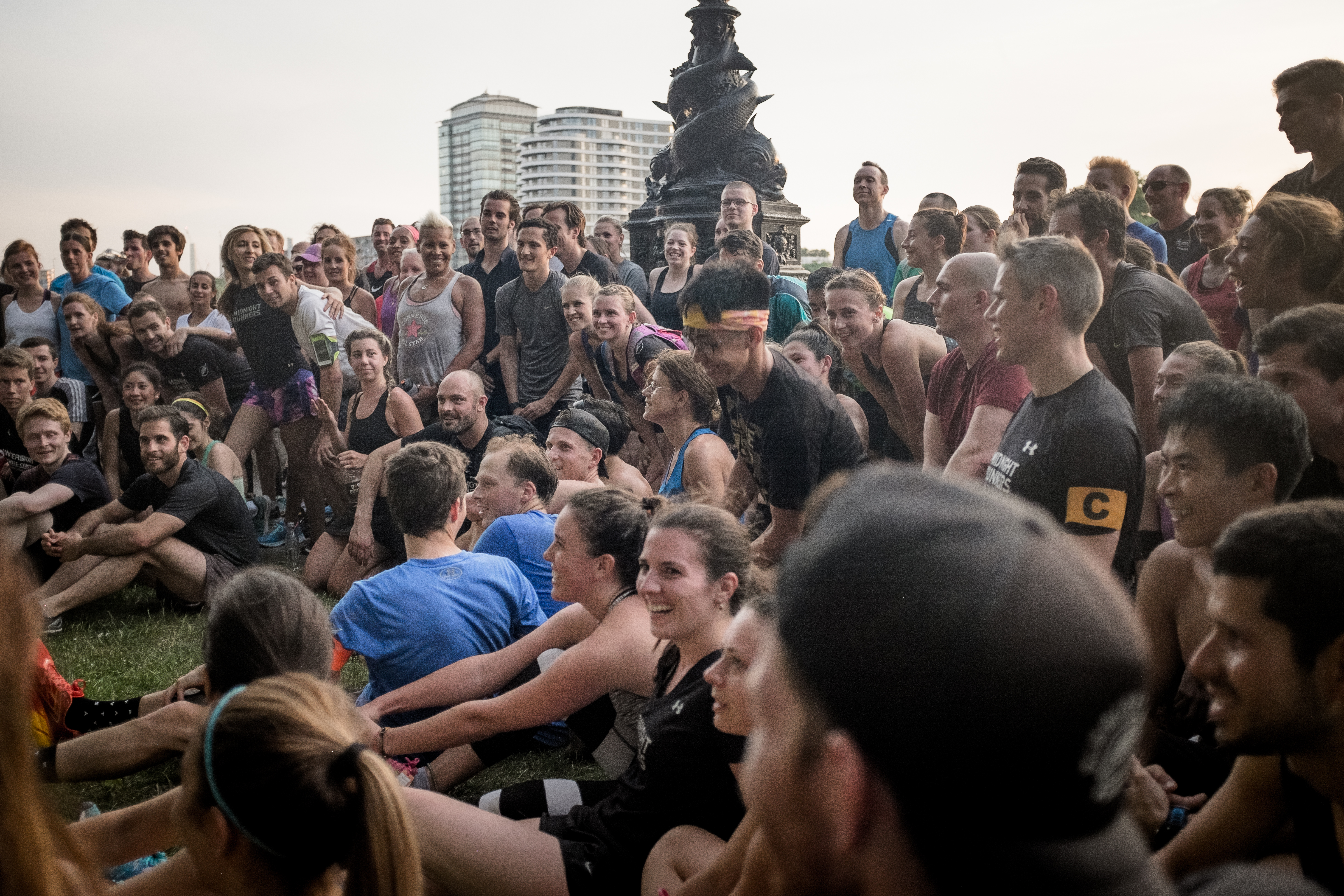